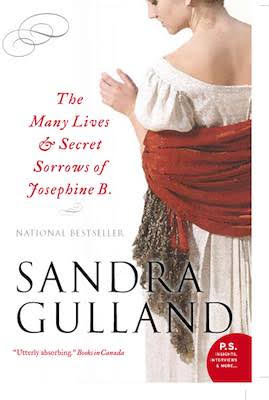 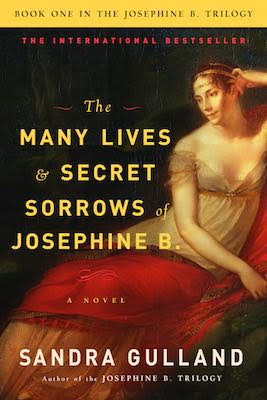 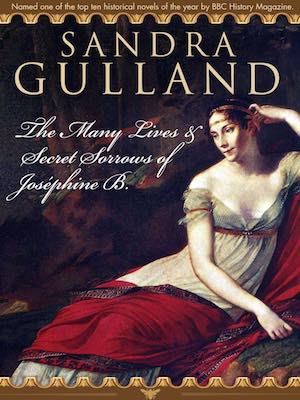 The Many Lives & Secret Sorrows of Josephine B

“You will be Queen.”

The Many Lives & Secret Sorrows of Josephine B. is a sweeping, dramatic tale of romance, heartbreak, and political intrigue set during the tumultuous times of the French Revolution. Combining meticulously researched history and superb storytelling, author Sandra Gulland provides an intimate look into the lives of the men and women behind the revolution and relates Josephine Bonaparte’s marvelous, perilous rise from an innocent girl to one of the most sophisticated and powerful women in history.
The story opens in 1777 on the island of Martinique, where the young Josephine hears three predictions about her future: she will have an unhappy marriage, she will be widowed, and she will be Queen. Soon after, Josephine is sent to Paris to marry Alexandre de Beauharnais, and there her fortune unfolds. Through her fictionalized diary entries, readers learn of the birth of her two children and the dissolution of her marriage due to her husband’s indiscretions.
She tells of her days of imprisonment during the bloody French Revolution and of the fall of the French monarchy. Finally, she writes of her husband’s execution and of her fateful meeting with Napoleon Bonaparte with whom she will fulfill her destiny as Empress Josephine.
A richly detailed story, filled with the emotions of a young woman and a country under siege, The Many Lives & Secret Sorrows of Josephine B. takes readers on a fascinating journey into the heart of one woman whose destiny became inextricably entwined in the history of a nation.

“Utterly absorbing.” —Books in Canada “A reader’s bliss.” —Edmonton Journal
“… impossible to put down.” —You Magazine
“Gulland has huge fun … nothing seems beyond the grasp of her imagination. In her hands Josephine B. puts in a stellar performance. Now tender, now triste, she’s the Jackie O. of her day.” —Guardian
“A fascinating read from beginning to end…” —Quill & Quire
“… accomplishes what the best historical fiction does …” —The Toronto Globe and Mail “… magnetic in its appeal” —The Toronto Star

The editor survives the editing By Charles Gordon for The Ottawa Citizen, June 4th, 1995
Seeking Josephine in spirit world Writer uses medium in ‘biography’ research By Philip Marchand for The Toronto Star, July 11, 1995
Possessed by Josephine Napoleon’s wife holds author enthralled By Paul Gessell for The Ottawa Citizen, Wednesday, June 3, 1998
Walking in Josephine’s Shoes Sandra Gulland is so obsessed by Josephine Bonaparte that she sometimes writes cheques with the date 1800. She tells Alexandra Gill how her best-selling trilogy about Napoleon’s wife changed her life. By Alexandra Gill for The Globe & Mail, Saturday, November 4, 2000

1. Why does Ms. Gulland use the form of a diary to tell Josephine’s story?
What are the benefits and/or drawbacks of telling a historical story in diary form?
What techniques does Ms. Gulland use to make us believe in the authenticity of the diary?
2. How does destiny play a role in the lives of the different characters?
What effect does knowing her fate ahead of time have on Josephine?
What effect do the predictions have on you, the reader?
Josephine writes, “The fact that I was a widow now, that this had been foretold — did that mean that my marriage to Alexandre had been part of a larger plan?… I found the idea of destiny both comforting and terrifying.”
How is it both comforting and terrifying?
3. In her diary, Josephine often mentions the corset. She writes, “We got me all done up with a bottom and a bosom and tiny, tiny waist. I looked beautiful, but I couldn’t breathe and I very nearly fainted….It was torture being inside this construction.”
How does the corset function as a metaphor for the role of women in this society before and after the revolution?
What does it say about society as a whole?
4. Josephine also pays a great deal of attention to intricacies and rituals of dressing, dances, and codes of social behavior.
What does this devotion to form and appearances say about the culture before the revolution?
In what way does it lead to the revolution?
How does this concern for form change after the revolution?
How does it remain the same?
5. After the revolution, Josephine writes in her diary, “I was struck with how things have changed. Where before people paraded finery, now they boast economy. Where before our distractions were about games and charades, now people amuse themselves with talk of politics. Where before we talked of beauty, we now talk of Equal Representation.”
What exactly is different after the revolution?
Who is better off after the revolution and why?
What has been gained, what has been lost?
6. How would you describe the philosophy behind the revolution? What is the cult of reason?
Do you see discrepancies between the philosophy of the revolution and its manifestation in the lives of the people?
How do you reconcile these discrepancies?
7. Do you see a schism in the thinking behind the revolution between what is good for the country and what is good for the people?
What is the difference between public and private sentiment in the lives of the characters during and after the revolution?
Why does this duality exist?
8. What role did women play in Josephine’s pre-Revolutionary France, and how did they change during the revolution?
What did society value about women during this era?
After the revolution, Josephine writes in her diary, “Inside, the theatre was like a private reception, everyone going from loge to loge, so unlike former times when it was considered improper for a woman to even move from her chair.”
How is life different for women after the revolution and why?
9. Josephine’s Aunt Désirée says, “A wise woman does not allow her husband’s amusements to disturb her. A wise woman closes her eyes. In allowing her husband’s freedom, she dominates him.”
Why is it so hard for Josephine to accept this type of thinking?
Do you agree with this logic?
How do Josephine’s ideas about marriage change over the course of the story?
Why does Josephine marry Bonaparte?
10. It is said of Alexandre before the revolution, “Monsieur de Beauharnais practices dance steps all day long, watching himself in the big looking glass.”
What kind of man is Alexandre?
Is he a hypocrite or an honorable man?
Is he arrogant or selfless? Give examples to back up your thinking. How do you reconcile Alexandre’s heroic deeds in the revolution with his deceit in marriage?
Can you think of any similar situations in today’s world?
When Alexandre won’t let his children leave Paris and tells Josephine that he is not valuing his own safety over that of his children, how do you justify his thinking?
Does Alexandre change over the course of the story, if so how and why?
11. Why is Alexandre, who is a Noble, so keen on the revolution? Alexandre is credited with holding the country together, but in doing so he “sacrifices his father’s regard and his brother’s fraternal embrace.”
What motivates him to do this?
Discuss the distinction Alexandre makes between his family and his country. Do you understand it?
Why is Alexandre such a ripe candidate to be a hero of the revolution and not his brother François? 12. Josephine writes in her diary when she goes back to Martinique, “Only I have changed, thinner, dressed in elegant silk and lace, wearing a bonnet that hid the sadness in my eyes….I remember so clearly the first time I saw Alexandre, a handsome young man reading Cicero’s Treatise on Laws. It seems another world, another time — another Rose.”
In what way does Josephine grow and change over the course of the story?
In what ways does she stay the same?
13. Bonaparte tells Rose, “You think the woman I love does not exist. You don’t believe in Josephine.” Discuss how and why a name could have the power to change one’s life?