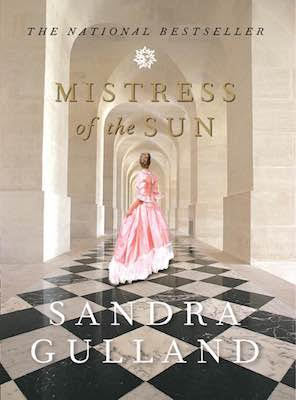 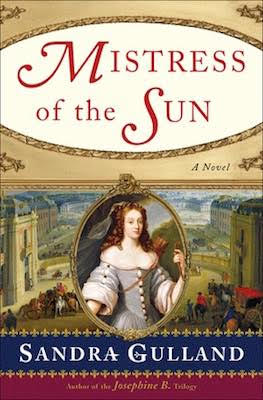 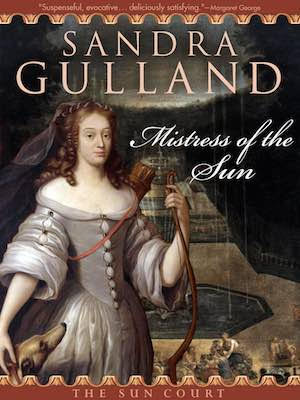 Mistress of the Sun

Mistress of the Sun is a novel based on the life of Louise de la Vallière, who, against all odds, became one of the most mysterious consorts of France’s Louis XIV, the charismatic Sun King.

Set against the magnificent decadence of the seventeenth-century French court, Mistress of the Sun begins when an eccentric young Louise falls in love with a wild white stallion and uses ancient magic to tame him. This one desperate action of her youth shadows her throughout her life, changing it in ways she could never imagine.

Unmarriageable, and too poor to join a convent, Louise enters the court of the Sun King, where the king is captivated by her. As their love unfolds, Louise bears Louis four children, is made a duchess, and reigns unrivaled as his official mistress until dangerous intrigue threatens her position at court and in Louis’s heart.

A riveting love story with a captivating mystery at its heart, Mistress of the Sun illuminates both the power of true and perfect love and the rash actions we take to capture and tame it.

A Romany woman in a crimson gown flashes by, standing on the back of a cantering horse. Her crown of turkey feathers quivers under the burning summer sun.

“The Wild Woman!” announces the showman, flourishing a black hat.

The crowd cheers as the lathered horse picks up speed. It tosses its big head, throwing off gobs of sweat and spittle. Its tail streams, and its hooves pound the dust.

The Wild Woman puts out her hands, her diaphanous skirts billowing out behind her. Slowly, she raises her bare arms to the cloudless sky and shrieks a piercing war cry.

A pale girl—barely tall enough to see over the rails—watches transfixed, imagining her own thin arms outstretched, her own feet planted on a horse’s broad back. She presses her hands to her cheeks in wonder. Oh, the wind!

It was 1650, the eighth year in the reign of young Louis XIV—a time of famine, plague and war. In the hamlets and caves and forests beyond, people were starving and violence ruled. The girl had just turned six. She was small for her age, often taken for a four-year-old—until she spoke, that is, with a matter-of-fact maturity well beyond her years.

She wore a white close-fitting cap tied under her chin with ribbons, her golden curls falling down her back to her waist. Her gown of grey serge was adorned with a necklace she’d made herself from hedgehog teeth. A pixie child, people sometimes called her, because of her diminutive size, her fair coloring, her unsettling gaze.

The girl followed the Wild Woman with her eyes as she jumped from the horse and bowed out. Waving her feathered crown, she disappeared from view.

The girl pushed her way through the crowd. Ignoring two jugglers, a clown walking on sticks, and a tumbling dwarf, she circled around to the sprawl of carts on the far side of the hill.

There, she found the Wild Woman, pouring a leather bucket of water over her tangled black hair. The tin spangles on her gown caught the light.

Her horse—a piebald with pink eye-lids—was tethered to an oxcart close by.

“What do you want, angel?” she asked through dripping tendrils.

“I want to ride a horse like you do,” the girl said. “Standing.”

“Do you,” the woman said, wiping her face with her hands.

The woman laughed. “And where be your father now?”

The horse pawed at the dirt, kicking up clouds. The Romany woman yanked its frayed lead and said something in a foreign tongue.

The horse raised its ugly head and whinnied; a chorus answered. Horses.

The girl crept between the wagons and tents, making her way toward a clearing where four cart horses, a donkey and a spotted pony were grazing.

The tethered bell mare looked up as she approached, then returned to chewing the loaves of mouldy bran bread that had been thrown down in a heap. The summer had been dry, and grass was sparse.

It was then that the girl saw the horse standing apart in the woods — a young stallion, she knew, by his proud bearing. He was fenced off from the others, one foreleg bound up with a leather strap. He was a White, high in stature. His neck was long, slender at the head, and his up-pricked ears were small and sharp.

Words from the Bible came to her: I saw Heaven open, and behold: a White horse.

His eyes looked right into her. Sing ye!

She thought of the stories her father had told her — stories of Neptune, sacrificing his Whites to the sun, stories of winged Pegasus. Worship Him that rides on clouds.

She thought of the King, a boy not much older than she was, stopping the riots in Paris by riding into the fray on a White. He who rides Him is faithful and true.

She knew this horse. He was the horse in her dreams.

She picked her way across the clearing. “Ho, boy,” she said, her hand outstretched.

The stallion pinned back his ears, threatening to strike.

“Exquisite and fantastic detail . . . to be savored and enjoyed. Take your time with this one; you will not want it to end.” — Romantic Reviews Today, Perfect 10 Rating

“I fell in love with Petite from the moment she tamed her wild, white horse, and I galloped along with her through her undying devotion to one of France’s most colorful kings.” — Anne Easter Smith, author of Daughter of York and A Rose for the Crown

“Here’s a warning: Mistress of the Sun is dangerously seductive. It’s one of those books that will grab you and hold you captive till the last page is turned — and even then, chances are you’ll find yourself, eyes burning, online at midnight, ordering Sandra Gulland’s other books. Yes, it’s that good.” — Geeta Nadkarni, for the Calgary Herald

“Beautifully told and elegantly written, Ms. Gulland’s novel, Mistress of the Sun, sweeps the reader up and transports them into the opulent world of the 17th Century French Court… In this tale, Louise de la Valliére leaps boldly from these elegantly written pages. She is unforgettable, as is this brilliant novel!” — Diane Haeger, author of The Perfect Royal Mistress

Where did the idea for Diablo come from? Is Bone Magic real?

Click here for the answers to these questions and more.

Click here for details about the research that went into writing Mistress of the Sun.

Click here for music of the Baroque period—perfect for listening to while reading Mistress of the Sun.

Click here to see a Google map of the sites in the novel.

A YouTube search for my name will give you a number of videos of my readings—which I invariably give in a 17th-century gown.

Author Q&A in January Magazine.
For the curious:
Portraits of Louise de la Valliére on Flickr
Court of the Sun King photos on Flickr
On Bone Magic

Click here for further reading on the Court of the Sun King and here for my full Sun Court bibliography.

1. Why did young Petite turn to bone magic to tame Diablo? Did she understand the ramifications of her actions? As an adult, did Petite regret this decision?

2. “The Devil gives nothing away for free” (page 13). In what ways did Petite pay for using the Devil’s power? Is the use of “evil” for a “good cause” ever justified?

3. Many “ghosts” appear throughout the novel, usually in dreams, including the Lady in White, Diablo, and Petite’s father, Laurent. Discuss their significance and their effect on Petite. What is it that haunts her?

4. “It felt strange for her mother to be touching her” (page 85). Discuss the relationship between Petite and her mother, Françoise, both as a child and an adult. How does it compare with her feelings for her aunt, Sister Angélique?

6. When Jean takes his sister on a tour of Paris for the first time, they climb to the top of Notre Dame, at which point she notes: “It seemed a monstrous and unnatural thing to see the world from such a height” (page 170). What does Petite mean by this statement? Is it foreshadowing?

7. What does Diablo mean to Petite?

8. Marie-Anne says her father confided in her that her mother was the only woman who ever loved him. Did he return Petite’s love? How did his feelings change over time — and why?

9. When Louis first meets Petite, he’s reminded of Diana, the Goddess of the Hunt. And Louis is referred to as the Sun God Apollo. Are these comparisons accurate? Why does Sandra Gulland invoke Roman and Greek mythology?

10. Early on in their relationship Athénaïs alerts Petite that “A woman of Court…will do anything to get…[the King’s] friendship” (page 267). Was there evidence of Athénaïs’s true intentions all along? Did her behavior surprise you? Did she ever love either Louis or Petite?

11. Part IV is titled “Mislove.” What does this term mean? Does it accurately reflect Petite’s relationship with the King?

12. Petite is frequently warned that at Court, “nothing is as it seems” (page 298). Discuss this as an overall theme in the novel. Is there anyone who doesn’t wear a mask? Consider the people Petite confides in: Nicole, Clorine, Athénaïs, Abbé Patin, Gautier. Who can Petite trust?

13. One of Petite’s ancestors rode alongside Joan of Ark. Why does the author include this back story? Do you see any similarities between the two women?

14. Petite confides in Gautier that she doesn’t see her relationship with Louis as a sacrifice (page 321). Does she truly believe this? Ultimately, what, if anything, does Petite sacrifice for Louis’s sake? Does she comply out of love or loyalty to the Crown?

15. God is Petite’s “best friend” (page 323), and yet the Devil is always lurking. Which influences Petite most — her love of God or her fear of the Devil?

16. Knowing the outrage it will cause, why does the King publicly acknowledge Petite’s children as his own? How does the new title “Duchess” affect Petite, if at all?

17. “Diablo was stubborn, but she was stubborn too” (page 513). What other characteristics do Petite and Diablo share? In the end, are they both free?

18. What does Versailles (“Versaie” in the novel) mean to Petite and Louis at first, and what does it become? Do the changes reflect a change in their relationship?

19. How was “magic” used at that time? Why was its use prevalent? In what ways are such things used today — and why?

20. “[It seemed] they were all of them ensnared,” Petite reflects (page 122). What choices did women have in that era? What other choices might Petite have made?

Assign people to research different aspects of France during King Louis XIV’s reign. One person can learn about politics, another can look into costumes, religion, witchcraft, etc. Then share what you discovered with the group.

To see a different perspective of France during this era, watch the 1998 film The Man in the Iron Mask. How does the film portray King Louis and others compared to Mistress of the Sun?