“How did you get the idea for Diablo? What does he represent to Petite?”

Where do ideas come from? It’s such a dream-like process.

In 1990, while I was first learning about the life of Louise de la Vallière, a friend told me a story about healing a horse nobody dared touch. I knitted this account into a short story about Louise, a passionate fable in which she ultimately kills the horse she loves.

In this story—the kernel of what ultimately, many years later, became Mistress of the Sun—the King’s horse, a dangerous black stallion named Hannibal, was dying. Petite is able to approach the horse and save it, thus beginning her relationship with the King.

I started writing the novel version of this short story in 1992. I had just finished writing The Many Lives & Secret Sorrows of Josephine B., the first of what was to become the Josephine B. Trilogy, and my agent was looking for a publisher for it. The following year I was offered a contract, so I (rather reluctantly) put the novel about Louise away, planning to return to it once the trilogy was finished. 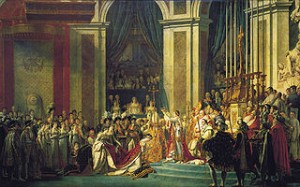 In 1999, I went to France, to Paris. It was my last research trip for Josephine. On a trip to the Louvre, I wept leaving David’s magnificent painting, Coronation of Josephine, knowing that I would soon be leaving Josephine’s world. 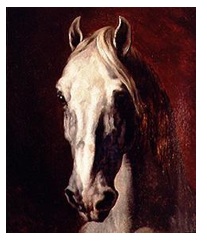 On the way out of the Louvre, I bought a postcard of a painting of a white horse (“Head of a White Horse” by Theodore Gericault, above). This was my lifeline to the next book—something to draw me forward, something to help me leave Josephine behind. [I have written about this experience on my blog.]

This, then, is where Diablo began, with that horse portrait, which I put above my desk. What does he represent to Petite? I think Diablo represents connection with a true and wild animal spirit: her own wild, animal spirit.

Petite has such a love of horses. Do you have an affinity for them, or other animals, as well? If not, what is your great passion?

I am what is called “a horse person”—I have an elderly Thoroughbred, Finnegan, a noble gentleman, if ever there was one.

One of the reasons history attracts me is that is a world of horses. The greatest pleasure in researching Louise’s story was learning about horsemanship in the 17th century. Bone magic really was something used to tame horses, and was believed to make men go mad, “Gone to the river.” [Read more about Bone Magic here.]