Thank you, Josephine: an interview 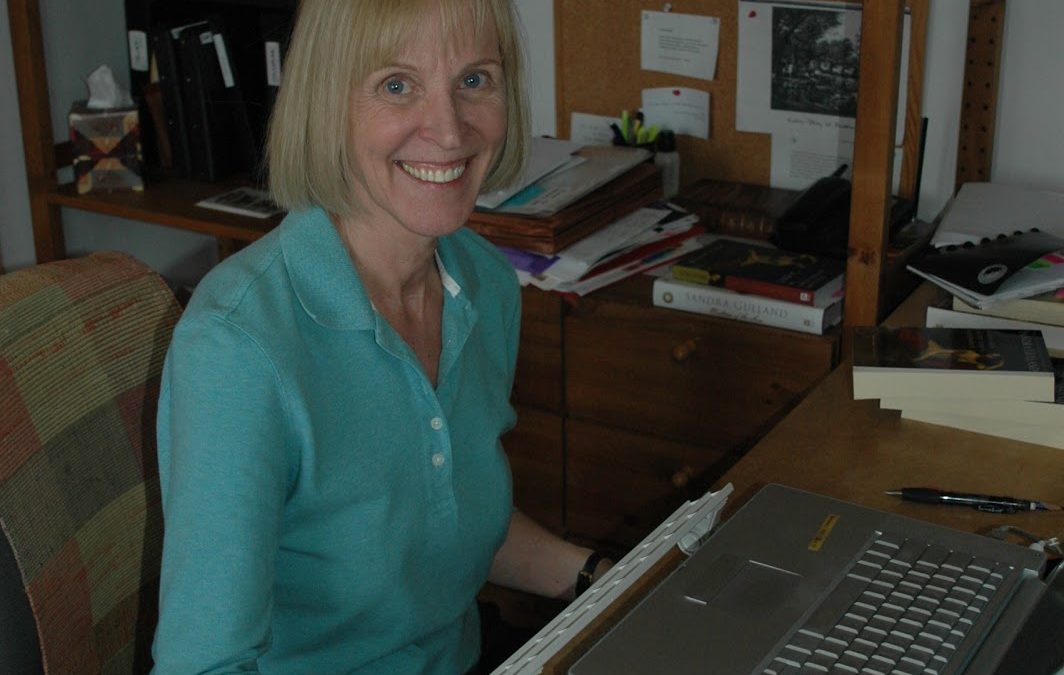 Thank you, Josephine
Destiny has smiled on historical fiction writer Sandra Gulland
By Janice Kennedy for The Ottawa Citizen, September 10, 2000

Sitting in her home office, a tiny, perfect Room of Her Own, Sandra Gulland has a confession to make. The room-where, over the past decade, she has turned herself into an international publishing phenomenon-is an addition to Gulland’s comfortable log house, a family home that sits solidly atop a hill, surveying the broad and rolling spaces of Renfrew Country two hours from Ottawa’s urban greyness, four from Toronto’s, and more than a million from the finely etched world of her best-selling novels.

Gulland, for the past 20 years a contented resident of the countryside near Killaloe, Ont., is the author of a trilogy of historical novels about an intriguing woman in an intriguing time. The Many Lives & Secret Sorrows of Josephine B. (1995), Tales of Passion, Tales of Woe (1998), and The Last Great Dance on Earth (to be released Sept. 23) all chronicle the fabulous world, 200 years ago, of Marie-Josephe-Rose Tascher Beauharnais Bonaparte-a.k.a. Josephine, the emperor Napoleon’s wife and soulmate. As part of the Ottawa International Writers Festival, Gulland will talk about her books, and read from the latest one, at 5 p.m. at the national Arts Center.

The books have sold briskly in Canada, the U.S. and Great Britain-and have also been selling well in their French, German, Italian and Danish translations. The Spanish version will appear in January, and expectations are high there, too. The German hardcover edition of the first novel alone sold 25,000 copies, a number whose impact is not lost on an author writing in a country where sales of 5,000 constitute best-selling status. In Britain, she found herself on the Guardian bestsellers list, an honour she discovered only when a London friend e-mailed her the news.

Most thrilling of all, she suggests, is how well the books are doing in France, which she expected to be “the most resistant market.” Her publisher there told her that when the first book appeared, a French historian who was reviewing it called the company to congratulate them on publishing it. A historian. In France.

“That is the highest praise,” laughs the 55-year-old Ontarian, “It’s exciting, I admit. I certainly never, in a million years, expected it. In fact, when I began, I thought, ‘No one’s going to want to publish this, let alone read it. This is a lost cause.’ So all this is just astonishing.”

What is almost as astonishing, given the books’ success, is Gulland’s confession.

“I was never really a history buff,” she admits. “In fact, I abhorred history.”

It was not history that Gulland focused on when she studied at San Francisco State College and then at Berkeley back in the late 1960s. (She started out in math and ended with a degree in English literature.) It was not history she used when, after emigrating to Canada in 1970, she worked in Toronto editing books for young adults.

But some years ago, while exploring the concept of destiny, she stumbled upon Josephine, for whom there was documented evidence to support the belief that her imperial status had been prophesied.

“That intrigued me. I can’t say that I believe in destiny, but the fact that it would appear to have been documented in such a spectacular way intrigued me. And it continues to intrigue me. And so I became interested in Josephine as a woman, and through her discovered everything else. Through Josephine, history became real for me. I realized these were real people, not cardboard figures.”

Written as a series of journal entries by Josephine, interlaced with letters by and to her, the books trace the life of their heroine from age 14 through to her death in 1814, the year before Napoleon met his Waterloo. The first book covers 19 years, taking Josephine, daughter of an impoverished French plantation owner, from her native Martinique (where it was prophesied she would one day be queen), to Paris and her unhappy marriage to Alexandre Vicomte de Beauharnais, through the Revolution and the Reign of Terror (where she was imprisoned and very nearly guillotined), to her meeting with, and quick 1796 marriage to, the rising star of the French army. Book Two covers four eventful years, following Josephine through the turbulence of marriage, her husband’s stunning military successes and his even more stunning consolidation of political power. The last book, which traces the final 14 years of Josephine’s life, re-creates the world of the French Empire, wherein Josephine fulfilled her adolescent prophecy and became empress, even as she lived through a passionate marriage marked by infidelity, infertility, ultimately divorce-and great, soul-shaking love.

“They really had quite a marriage,” Gulland smiles. “She wasn’t a figurehead wife at all, even though she certainly had that role in terms of public relations. He was very attached to her as a person.”

She dismisses the misconception, which she insists is based on either a lazy or an illogical use of historical evidence, that Napoleon and Josephine’s marriage was strictly one of convenience. “She became absolutely devoted to him. And his love for her is historic-he was crazy in love with her. That crazy passion, of course, diminished and became more realistic. And even though he was quite unfaithful to her as emperor, he was never really unfaithful to her as her husband. He seemed to require her companionship, and it’s said that his dying words were of her. I think they had a special bond.”

Gulland can say all this because she has spent the past 10 years of her life in scrupulous research, learning French (“I’m a constant student”), traveling to all the locales in Martinique, France and Italy connected with Josephine, and communicating with historians in person and through the Internet. Inter-library loans through her local library, as well as books from the University of Ottawa and Carleton (which maintains an extensive Napoleonic collection) rounded out her own impressive historical acquisitions.

The result is a trilogy of novels that brings a shadowy historical figure to full, vibrant life. Readers go behind the scenes of a momentous period of political and military history, and learn not only about the time but also a woman who loved her pug dogs, who tried to hide her bad teeth, who used grace and cunning to cope with the in-laws from hell, who was a sensuous lover, a devoted mother, a warm and loving friend, whose life was a story of continued brave attempts against impossible odds.

Observing the line between fiction and history was a challenge, Gulland admits, but essential. “It’s important for me as a writer to feel that what happened, happened, because that helps me connect. I can’t allow myself to falsify a situation, unless it’s really a minor detail. I will simplify a storyline-that’s really necessary because there are so many people going off in all directions-but I try to make it as true as I perceive it to be. And in those big gaps where there’s no information, then I have to feel that this could have happened. The more detail I can get that’s accurate, the stronger that makes me feel. In the coronation scene in this book, for example, when a stone from the ceiling falls on Napoleon’s shoulder-that in fact happened.”

She admits that she is not by nature an organized person, but researching the books transformed her into one. In her office, she shows off an open cabinet filled with “character files,” each one containing all the research she has accumulated on any given person in the book. “Barras,” for instance, tells you everything you need to know about wily Director Paul Barras, “Hortense,” about Josephine’s beloved daughter. And to keep it all chronologically controlled, Gulland maintains a huge binder crammed with research on every conceivable area, the lot broken into a timeline of days.

“This is the backbone of my story. At any one time, for any given day, I can get a snapshot of all the various things that were going on.”

All this, from a hilltop in Renfrew County not far from Eganville.

She wouldn’t have it any other way, she insists. The scenery is beautiful, the air fresh, the community warm and stimulating-and the space large enough (riding being one of her passions) for her to keep her horse Finnigan on her property. Gulland and her husband moved here from Toronto 20 years ago, planning to stay a year, and never went back. They raised their daughter and son here (the two grown children are now living in Toronto), and became enthusiastic members of a community that also included other peace-seeking refugees from the city. Killaloe life is a far cry from the intrigues of 18th- and 19th-century France-and almost as far from the 1960s turbulence of Berkeley, California, where Gulland grew up.

“Even my high school was politically energized. In English class, I sat next to a girl who probably started the very first sit-in.”

What brought her to Canada was, in part, her pacifism. “I found the violence in the States very difficult to live with.” She made her decision to leave the night Bobby Kennedy was assassinated in 1968, and made the move itself two years later. “Canada was the obvious alternative. I had a very good impression of it, and I loved it the instant I crossed the border.”

After maintaining dual status for a while, she gave up her American citizenship some time ago to be exclusively Canadian, like her husband and children. But ties with her family in California remain close, and she makes frequent visits back.

In the meantime, from her home in rural Ontario, Gulland-who used to hate history-has become an expert on a French empress born more than 200 years ago on a Caribbean island. Go figure.

Her next book, which she intends to start working on as soon as the Josephine publicity whirlwind dies down, will stay in the same country, though not the same century. It will be set in the court of Louis XIV, the Sun King. One of the fabulous characters of the time, royal mistress Louise de la Valière and Gulland’s possible heroine, was a noted horsewoman.

She grins. “I’m looking forward to the research.”