I’ve long been a “counter.” When I pick up a book review magazine or newspaper book pages, I scan the headlines. How many female reviewers? How many books by women reviewed?

This began years ago, when I looked at an issue of The New York Review of Books and realized with a shock that there was only one woman represented in the entire issue. For years there were heated discussions on-line by members of the Writers’ Union of Canada. 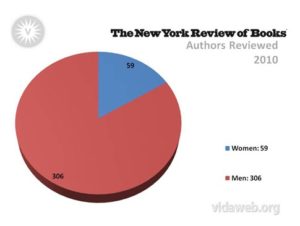 An on-line article on Slate, “Women at Work,” concludes:

The world of novels, we often hear, is a feminine one: book buyers are predominantly women; novels and memoirs by women and about women’s lives often do extremely well commercially. (Think of Eat, Pray, Love and The Lovely Bones.) So you might shrug and say: what’s the problem? But VIDA’s study raises questions about how seriously women writers are taken and how viable it is for them to make a living at writing.

What’s the problem? What do you think?