I just started to use my MacSpeech Dictate program and I have to say I’m impressed. I am standing away from the computer talking into a microphone, not even looking at the screen. In a few minutes I will go over and see what in fact has appeared.

I can’t believe it. It’s perfect. 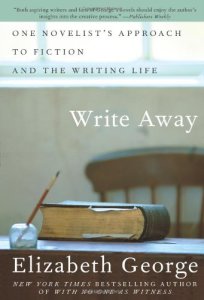 So now what? I wish I had some research notes to test. Okay. I’ll talk about Elizabeth George‘s book Write Away.

I like this book: she details the professional nuts and bolts of her way of writing a novel. She’s candid and honest and not too abstract.

For example, she writes:

“To give myself a sense of direction, I do two things. I create a step outline. I then expand it to a running plot outline.”

I find this interesting. Right now, I’m creating (in brief) scene ideas which I will, at some point, arrange in the order I think they might unfold in my novel. I am a long way from the making-order stage, however. Right now I just imagining scenes, one upon another. Soon, I will begin to think about ordering these scenes.

“Every scene contains something within it that triggers a scene that follows.”

She can type her step outline on a single sheet of paper, and it doesn’t take her longer than a few hours. It’s confessions like this that make me feel like a wimp!

However, having now read the entire book, I understand how much preparation she’s done before creating the step outline:

1. Idea: basically, the story described in one long paragraph. I find this one paragraph impossible to write. I’m still looking for the idea, no doubt casting my net too wide.

2. Research: once she has an story idea sketched out, she begins her research, which is extensive and well-organized (I am impressed).

3. List of characters: she lists all the possible characters in the novel, giving careful thought to their names.

4. Detailed description of each character: her documents describing each character are extensive—three or four single-spaced pages long. I always mean to do this, but never do.

6. And then—the step outline. She aims for 10 to 15 causally-related events, noted down in abbreviated form.

I thought: okay, I’ll give it a try—see if I can come up with a short list of linked events. But no way: it’s hard. She’s a thriller writer, so that surely must help.

More on this to come.

(I’m finishing this post in a café in Berkeley. I just stocked up on my new favourite pen—a bold Uni-ball Gel Impact RT—and my long-time favourite pencil, Twist-Erase with a .9 lead. Plus a lovely grid-lined spiral notebook, one of the many I buy and never use. This is the store I remember buying stacks of tiny cards for French vocabulary as a pre-teen. It now has a sign on the door, “This is a soft building”—a warning in case of an earthquake.)

Some Quotes from ‘Write Away’

I’m in California now, in the basement apartment of my father’s house. Tomorrow is my sister’s wedding: the Big Day. Yesterday I got my toes and nails done, and took Dad to a barber to get trimmed up. Today I’ll find a card, which as any woman knows is a time-consuming task, necessitating reading every card on the rack. The card store I have in mind is close to two of my favorite clothing-shopping stores, so will I be able to resist? (Doubtful.) A very good bookstore used to be in this block too, but the last time I was here, it seemed on last legs. If it’s still there, I’ll browse there, too.

I’ve been reading Elizabeth George‘s Write Away, and I like it. I love the quotes from her journals, her fears and struggles. She has a very matter-of-fact way of putting things. I’m almost finished with it, in part because I don’t read the excerpted examples included (never have, never will).
Here are some quotes.

“What you should keep in mind is that anything in a character’s environment can serve as an indicator of his internal landscape if you use it wisely.” [38]

She makes it clear that you need conflict to have a story, and that events must occur as the conflict unfolds, and that these events “must be organized with an emphasis on causality.” (Like dominoes.)

Which made me ask: what is the central conflict in my story?

In other words, the writer is a tease.

On character (which is where she begins):

“I believe it’s critical to know the basic need each character has in his life because the denial of that need leads directly to the second area that I consider crucial in developing a character. This is his pathological maneuver. Better said, it’s what the character does when he’s under stress. The supreme stress he’s ever under, by the way, is having his efforts to meets his core need thwarted.” [50]

“The final important area that I include in my analysis is to decide what the character wants in the novel. (I make this decision about each scene as well, giving an agenda to each character in a scene.) [52]

More on voice and plot to come …

And no, I haven’t been getting to my scenes. Thinking of them, but coming up short.

(Having written that, I wrote the five.)

I love reading books about writing, especially when I’m somewhat stuck, or balky. Yesterday I took a load of unwanted books to The Bookstore in Golden Lake, run by my writing friend Jenifer McVaugh. In exchange, I brought home a load of new books, a number of them books on writing. The Art of Dramatic Writing by Lajos Egri is a classic; a number of people have mentioned it. The Practice of Poetry by Behn & Twichell is a book that Jenifer loaned me, a book she recommends, and one I’m looking forward to exploring. The Sound of Paper: Starting from Scratch by Julia Cameron looked interesting. I got a great deal out of her book The Artist’s Way, but haven’t connected with any of her newer books. This one might suit; I don’t know. I’m skimming it—I’m a little annoyed, already, by her predictable list assignments, but, as is always the case with a book by a writer on writing, finding bits that resonate.

The book I started reading right away was (heh) Write Away by Elizabeth George. I like it. It’s nudging me to do things I know I should be doing, like character analysis.

” . . . you cannot bring a character to life in a book unless he or she is alive before the book begins.”

I’ve always been a bit lazy about this, I confess, allowing a character’s eccentricities to emerge during the writing, or during a 3rd or 4th draft emergency analysis.

I find this to be true, and it’s a key reason for my research trips. But it’s not only the sensual experience of a place that matters—for me it’s the deep conviction that something happened, and that it happened here, on this spot. 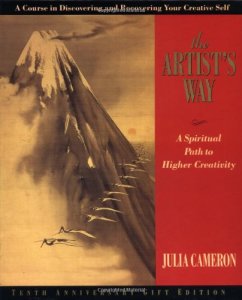 One thing I like especially is that George heads each chapter with an excerpt from her writing diary.

As for today: after writing in my journal that I was entirely dry in the scene-creation department, I wrote out (in brief) my allotted 5 scenes. Which pleases me greatly.

And then, on discovering that my reader mailbox was again 3-weeks deep, answered emails: one to the German translator of Mistress of the Sun, whose glowing email I treasure. One to a woman seeking a relative who may be related to Josephine (I get emails of this sort regularly)—I need to do a little research to answer. Several heart-warming letters from fans.

And now: taxes, which I hope to finish today. Beyond that, perhaps a walk on my horse, some research recording, some Q&As to work on, preparation for my European research trip (coming up).