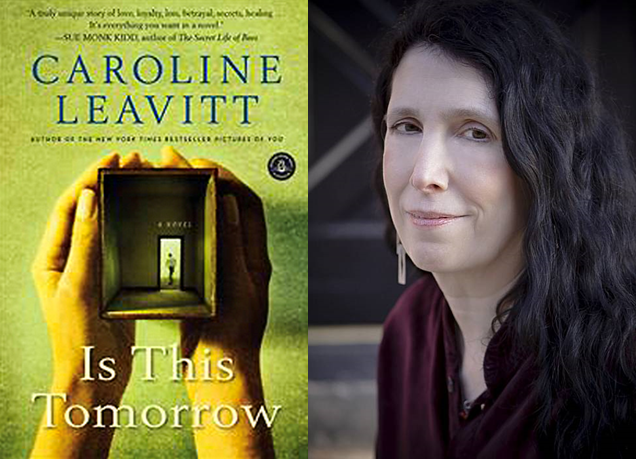 I’ve known Caroline Leavitt for almost as long as the Net has existed (i.e. rather a long time now), but I’ve only met her once or twice. I first knew her on-line through a wonderful Readerville.com writers’ chat group. (Oh, those days!) I read her blog, follow her on Twitter and Facebook, and read her essays and novels.

She has been a persevering literary writer, and with that went the word struggling, so it has been particularly pleasing to see how her last two novels—Pictures of You and Is This Tomorrow—have been such huge hits. And for three reasons, IMO: 1) she’s a fantastic writer, 2) she’s a pro, ready to step up to the plate, and 3) she’s now with Algonquin, a great publisher.

I just read and  loved her latest novel, Is This Tomorrow. Caroline has a flawless way of creating real characters and building dramatic tension. This was a novel I didn’t want to put down, that I thought about when I was away from it. As a writer, I longed to know about her process: how does she do it? I’m thrilled that she’s here to answer my questions!

Your novels are compellingly plotted and beautifully developed. How do you do it? What’s your process?

Oh, thank you! John Truby Story structure. I was always one of those writers who followed my muse and I ended up with 800 pages that I had to wade through to find the story. I hated most structure classes. The 3-act deal was like a prison. The rest seemed moronic. But then a UCLA student of mine told me about Truby, how he’s a Yale PhD who studied stories and came up with a kind of system for what all the best ones have–moral choices, reversals, reveals, self-revelations. It made sense to me. It seemed to create a deeper, more nuanced story, and the first time I “trubyized” a novel, I had a NYT bestseller! The first time I trubyized a script, I made the finals at Sundance Screenwriters Lab.

So I map things out in detail right from the start, and end up with a 30-40 page synopsis. Of course it changes as I write, because of discoveries, changes, etc. But the basic spine is the same. It gives you tremendous creativity for discovery, too!

I’ve become an intense plotter, as well, and I’m excited by the process. I recall that you introduced me to your relative’s hypnosis tapes, which I loved. Now I see that you’re experimenting with binaural beats, which sounds similar. Is this part of your writing process? Tell me more!

It is, actually. Binaural beats supposedly recreate the neuron firing of the brain and help you concentrate, get creative, even relieve tinnitus. Do they work or do I just think they work? I don’t know, but does it matter if there are results? I keep one on for creativity and it seems to work. But it might be the placebo effect. (And again, who cares?!)

I’ll be trying that! I was pleased to see mention of several Readervillians in your acknowledgements. Do you use reader/editors, and, if so, at what point in the writing process?

Oh, I absolutely do. I change a lot of them with each book, but right now I am totally dependent on three people. One I show my structural stuff to and he is a great help because that’s what he does–structure work. And I have two writer friends who read the novel chapter by chapter. And I miss Readerville!

I was interested to also note that you used researchers for this novel. (I recall a blog you wrote some time ago of a youth who volunteered.) This is something I’ve considered. How does that work?

I had to hire someone because I was spending whole weeks trying to find out what 1950s cops used instead of crime tape (sawhorses and rope!) So I hired two high school interns who were adorable, but not as helpful as I needed. Not their fault. They were learning. I next hired a pro, a librarian, who was amazing. Not only did she find me exactly what I needed, including a rare journal for male nursing in the 1960s, but she would add in things that she thought might be interesting for me–and they always were!

The best research tool? Facebook. I posted that I needed to talk to someone who had been a cop in the 1950s, or a male nurse, or a pie baker–and I was flooded with people. I called them up and I got the most amazing personal stories! Plus, it was so much fun. I’m doing that now for my next novel, Cruel Beautiful World (out in 2015 from Algonquin Books), which is set in the 1970s.

Another beautiful title. Your stories seem perfect for film-adaptation, and I know you have a film background. Are they under option? Development? I know, too, that you’re a Truby fan (as I am). What wisdoms from the film-realm have you brought to novel writing?

Oh Hollywood, it breaks my heart into shards. I’ve had lots of options. Meeting Rozzy Halfway was optioned by Paramount and dropped in a strike. Into Thin Air was optioned by two producers and Madonna was interested in making it her directorial debut for three days until she went on tour. Then one producer fell in love with the other and it all fell apart. Living Other Lives was optioned by this guy who did all of Stephen King’s early films. It had a script by Obie winner Tina Howe. And then suddenly, everyone vanished! I had a deal at Sundance for Pictures of You, and then the actress who wanted to direct and star got an offer from HBO for a series and that was that. I currently have an option for an essay I wrote in New York magazine and there’s lots of interest for Is This Tomorrow, but lots of interest doesn’t mean I am sewing sequins on my dress for the Oscars any time soon.

I so wanted to take control, I learned how to write script and got that Sundance finalist shot, but again, that doesn’t really mean anything. So much is luck and timing. I’m very superstitious and I lay out tarot card spells to make this happen!

I love that! You blog often, publish an excellent novel every few years (you have another one scheduled for 2015!), are active on social media and have a life. How do you do it?

I am obsessive compulsive, and that isn’t a good thing, actually. I am always doing fifty things at once, and I have this keen sense that time is limited (maybe because I was critically ill in the 90s for a year and not expected to survive, but I did!) and I have to make things happen as fast as I can. I wish I could relax!

What one thing would you say is key to (surviving) a writing life?

I have more than one!

Don’t write to the market because it will kill your art. Write the book you need to read.

Thank you for these amazing questions!

Thank you so much, Caroline!