And so: the filming of the documentary on Josephine is over: at least the part that I’m in. Here are photos from the first and last days of shooting: day 1, and the last day.

For day one, we re-enacted something I’d done a number of times after being at Malmaison: putting a rose on Josephine’s tomb.

I was moved to find out that every year on May 29, the day of Josephine’s death, flowers are put on the foot of her bed at Malmaison, and a mass given in her honour.

Was Josephine present, one wonders? Once, after a musical concert at Malmaison, a number of people claimed to have felt a presence.

For the last day of shooting, we met at Saint-Joseph des Carmes, where Josephine and her husband Alexandre were emprisoned.

Ironically, it was September 2, the 219th anniversary of the September massacres of 1792.  You can still see the blood stains on the walls of the small room Josephine shared with a dozen others: After, we moved to the gardens of the Palais Royal, where I sat with Bernard Chevalier, talking of Josephine (as we were being filmed, of course).

I first met Bernard 20 years ago, when researching Josephine; it was a pleasure to have a chance to see him once again. As the former curator of Malmaison and author of a number of wonderful books on Josephine, it’s fair to say that he’s the foremost expert on her life. He and Dr. Catinat, who also worked at Malmaison at that time, helped me greatly in sifting through the fact and (often scurrilous) fiction to be found in the biographies about the Empress.

As the crew was packing up, filming over, I asked him: If you could ask Josephine one question, what would it be? He gave that some thought before saying, “I would want to know if she slept with Captain Charles.”

I laughed. “That’s exactly the question I would ask.”

Both of us doubt that she did (although it was possible).

I also asked if he thought the Appiani portrait is in fact of Josephine, and he said that it is. And so, the mystery is solved: this is Josephine. (So lovely.) 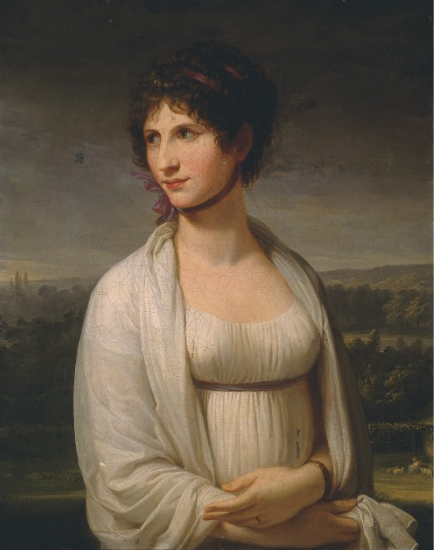 Now it is time for me to put thoughts of Josephine away and get back to the world of Claude des Oeillets. It has been an emotional experience re-connecting with Josephine.