An important part of writing is reading and I’ve been reading biographical fiction of late, one title after another, observing how other authors take on “a life”. Two I started and abandoned: they were set in the Court of the Sun King. One had too many factual errors for me to enjoy it. The other I began with joy—the language was bawdy and the spirit zestful—but I found the portraits of the characters too one-dimensional, and, again, there were also errors of fact (without apparent reason). It began to feel like an all-too-English portrayal of “those terrible French” (as if the English are so innocent!).

The next novel was a gem: November 22, 1963, by Adam Braver, a novel about Jackie Kennedy, primarily, and that fateful day. I’ll have more to say about this novel later (I’m at the beach, and the book is back home), but for now, I’ll make these general observations:

A highly dramatic and sympathetic subject is a serious leg-up when it comes to biographical novels, and this novel rates five stars on both counts. It held me breathless from the first sentence to the last, but in the hands of another writer, I could easily have set such a novel down, in spite of the compelling subject. But Braver is a fantastic writer. He handles this subject with perfect authority, elegance, but most of all: heart. This is a very spare novel: the author cuts between different points of view with great ease. We’re given slices of the various events of that day from the perspective of a police escort, a coffin manufacturer, the man whose life work was care for the presidential limousine, the various White House staff. 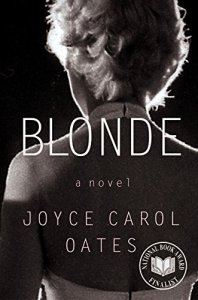 I followed this spare novel with one of vast proportions (728 pages of small type!): Blonde, by Joyce Carol Oates. I finished this last night and in a word: wow. I’ve not read Oates before—I find her style generally too gothic for my taste—but I respect her greatly as a writer, and I’d read that this novel, a novel about Marilyn Monroe, was her best.

It is a stunning—stunning—experience. Oates’ gothic, feverish, hallucinatory style is perfectly suited to the subject of Monroe. As a writer, Oates is fearless: there is nothing that she shrinks from. I wouldn’t have had the courage, personally, to write certain (awful!) scenes—especially those involving JFK (thinking of Caroline).

The characters are never named, interestingly: “the Ex-Athlete” is Joe DeMaggio, “the Playwright” is Arthur Miller, “the President” is JFK, for example. This was possibly a legal consideration, but, more importantly, it lent itself to the mythic feel of the novel.

It’s hard to create sympathy for an addict—drunks are notoriously impossible for the writer of fiction to portray sympathetically, for example—but I’ve come away from this novel with a great sympathy and respect for Monroe.

As always, I’m curious about what was not included: this is always key. Nothing about the Mafia lovers, nothing about her secretary. Certainly there were lovers enough, and a staff would have interfered with the image of Marilyn so very alone.

I believe that Author’s Notes are very important with respect to a fact-baced fiction. The reader needs to know: Where do we stand? What’s fact? What’s fiction? Can I trust you (the author)? Oates states:

Blonde is a radically distilled “life” in the form of fiction, and, for all it’s length, synecdoche is the principle of appropriation.

(Okay, I had to look up synecdoche: a figure of speech in which the part is made to represent the whole or vice-versa.)

Oates makes it clear that instead of many lovers, abortions, medical crisis, she will focus on a select few. With any biographical fiction, one must cut away, cut away, cut away to get at the essence, in order to bring a life to life.

Biographical facts regarding Marilyn Monroe should be sought not in Blonde, which is not intended as a historic document, but in biographies of the subject.

I appreciate her clarity, but what Oates has done, I’m quite convinced, is recreate Monroe’s spirit. An amazing work.