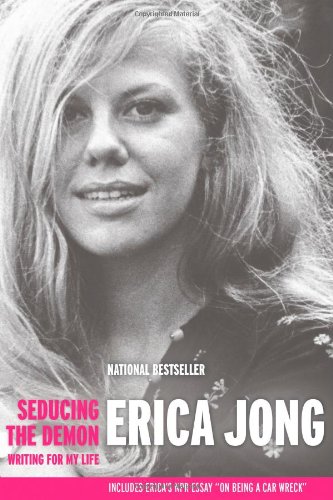 I heard Erica Jong speak recently. I went out of curiosity to see the author of Fear of Flying. It was her first novel, and, if I remember correctly, it sold 18 million in 27 languages. But most of all it shook the world with its frank eroticism, told from a woman’s point-of-view.

I thought she would be 90 by now, but she looks like a contemporary (that is, early-60-something). She was natural and open—authentic: she charmed the audience. “Being famous means that an awful lot of people know the wrong things about you.” True. I didn’t know that she is—first, first, and first—a poet. I didn’t know she’d won awards. I didn’t know she was such a hard-working writer. The fame of Fear of Flying was something she said she had to deal with, ignore. It was, for her, both a blessing and a curse.

Some snippets from her talk:

She spent all of her 20s trying to write Fear of Flying. She rewrites a lot and gives up often —pulling a manuscript back out of the drawer years later.

She talked about the subject of a poem before reading. For one, she explained that Sapho’s poetry was discovered on the papyrus used to wrap a mummified sacred alligator. “That’s the type of thing that drives a poet crazy.” I agree!

She’s now working on what she called “auto-fiction” (a term created by a French professor): autobiography + fiction. “Life has no plot,” she said, so the true account must be reshaped to create a story. (The process is the same for biographical fiction.)

She’s written a book on writing called Seducing the Demon: Writing for my Life. I’m interested in reading it.