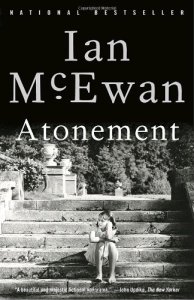 I’ve just finished reading Atonement by McEwan: what a masterful novel. I immediately searched the Net for discussions about it. It’s a novel that holds its grip. Now, what will I read? Everything seems pale by comparison. 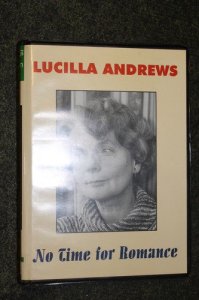 It is, technically, a historical novel. I recalled the plagiarism scandal: McEwan had apparently too-closely borrowed from a non-fiction account. Here, for example, is from Lucilla Andrews‘s 1977 memoir, No Time for Romance:

“Bit sort of tight. Could you loosen it?” … Then as I did not think it would do any damage to loosen the gauze bows, I let go of his hand, stood up, undid the first and, as the sterile towel beneath slid off and jerked aside the towel above, very nearly fainted on his bed. The right half of his face and some of his head was missing. I had consciously to fight down waves of nausea and swallow bile, wait until my hands stopped shaking and dry them on my back before I could retie the bow… [After he dies in her arms, a Sister says to her] “Go and wash that blood off your face and neck, at once, girl! It’ll upset the patients.” 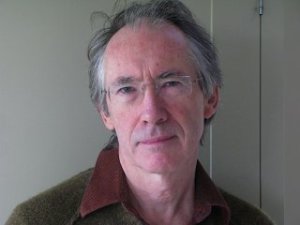 And this from McEwan, in Atonement:

“These bandages are so tight. Will you loosen them for me a little?” She stood and peered down at his head. The gauze bows were tied for easy release … She was not intending to remove the gauze, but as she loosened it, the heavy sterile towel beneath it slid away, taking a part of the bloodied dressing with it. The side of Luc’s head was missing … She caught the towel before it slipped to the floor, and she held it while she waited for her nausea to pass … fixed the gauze and retied the bows … The Sister straightened Briony’s collar. “There’s a good girl. Now go and wash the blood from your face. We don’t want the other patients upset.”

I remember the outrage over this and other “borrowed” passages. McEwan is beyond brilliant, but I think he could have integrated his research more, made it his own. I did feel that the war sections, although overwhelmingly powerful, were just a bit too research-thick. He is at his strongest, I think, when his focus is tight, when his characters are face-to-face.

I’m not sure, frankly. I’m still under the spell of this amazing novel.

Now, two days later, I’m still puzzling over this novel; that’s a wonderful feeling, when characters take up residence. I like the puzzles it leaves. I long for people to talk to about it. It would be an excellent selection for a book club, because there is so much to discuss.

Insofar as the plagiarism accusations, I think there is a strong case to be made “for the defense.” Writers are by nature magpies, stealing shiny things to make their nest. We are sparked by ideas, and throw them into the stew-pot of the novel. Had that nurse and patient story been told to me by a friend, I would certainly have used it. I gather my materials everywhere I go.

So is it so very different when the inspirational story is in written form? It’s touchy. I do think one needs to be more careful. What I do: I break up an account into bits, use parts here and there. I make sure to put quoted sections in quotes in my notes, so that I know to reword it. Even so, the source underpinnings of a particular scene might be evident to someone who knows the material well. 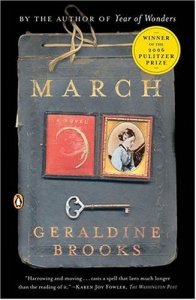 The Life of Pi was inspired by another work of fiction. There is a scene in Geraldine Brook‘s prize-winning novel March I know I’ve read elsewhere—I just can’t recall where. Novelists are blessed to find accounts that give them the true-life detail they need, and are apt to consume such accounts hungrily.