How to make postcards (and hopefully raise money)

Last summer, I was invited to be part of an unusual fund-raising campaign for The Writers’ Trust, an important organization that encourages writers. Would I write a dozen postcards? Of course! (Easy.)

I panicked. Was I collectible? And what could I possibly come up with? Everyone’s contributions were so creative. With some pacing, I finally decided I would make my own postcards from images that had been meaningful to me while writing the Trilogy, Mistress of the Sun, as well as the novel I’m writing now.

I Googled “how to make postcards” and sent away for a set of peel-off blanks. Once I began, I got carried away (of course). One image was not enough. I began layering images, one upon another, like this: 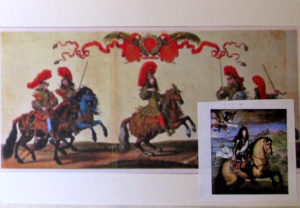 On the backs, I wrote what it was about each image that inspired me. But then of course I had to put images there, as well. 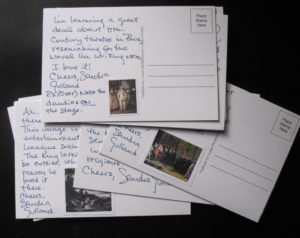 It was so much fun I didn’t want to stop.

The postcards are being auctioned for one week on eBay: here. It’s a worthy fundraiser, and I’m praying someone bids.

Tags: The Next Novel