“Literary” is not a four-letter word

.Whenever the word “literary” pops up in a discussion of historical fiction, someone is bound to get ruffled. It’s almost not PC, as if there’s something exclusive about it, something condescending.

I beg to differ. “Literary historical fiction” is simply a genre. It’s a descriptive term for a certain type of writing, and I think it’s time to raise the flag and not be apologetic about using the term.

It’s at this point that I begin to imagine hackles rising because there’s an implicit sense of “better” and the consequent “not as worthy.” But that really is irrelevant. Whatever one enjoys reading is the best for that individual, and whatever one writes, as well.

This is too long a rant for a blog, but I do want to mention the works that inspired it.

First, Coventry by Helen Humphreys. This is a wonderful novel. I love the spare, lyrical quality of Humphreys’ prose. She’s high on my list of favorite writers of literary historical fiction.

(An intriguing work is mentioned in Coventry: The Nomenclature of Colours. I found a book about it on Google Books and was able to download it. It doesn’t have the colour samples, but it does have some of the enchanting decriptions: White: new-fallen snow; Azure Blue: a burning colour.)

Second, a novel I read just recently: The Reliable Wife by Robert Goolrick. (Do not be misled by the cover and negative reviews.) This writer has a breathtaking style: sultry, haunting! 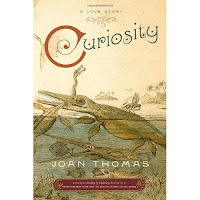 Third, a novel I  began just last night, and which I know, simply from the craft of the prose, I’m going to enjoy: Curiosity by Joan Thomas. (It’s available in bookstores in Canada and in a Kindle edition in the U.S.)