I’m going to be brief, because I should be revising The Next Novel.

I’ve been side-tracked a bit this week by information and stories about my mother’s family. (I am now in danger of catching the genealogy bug.)

I’ve long intended to dedicate The Next Novel to the memory of my mother’s oldest sister, my aunt Alecia. Ironically—or not—a number of the stories are about her.

My novel has a great deal to do with theater, and Alecia was, to me, delightfully dramatic. Her clothes closet was the size of a bedroom, full of every hat and frill imaginable. Such fun to play in with my cousins!

Alecia was always the one to take us “young’uns” to the theater: we needed “culture,” she said, but most of all she liked to see us dressed up. (I remember running excitedly to greet my cousins. I was in jeans and a t-shirt. They were in frilly dresses and white gloves.) Alecia was dynamic, fierce and girlish, almost an Auntie Mame figure to me, as well as a Mother Hen, invariably eccentrically and flamboyantly dressed. She adored stories of queens; she was a queen herself. Did she live in a fantasy? She had a huge collection of antique tea cups, but where was the garden party? She never found it; she was one of a kind in our Birkenstock Berkeley world.

I remember her as an older woman (although she was only 62 when she died). As a teen, she’d been a beauty, and news-worthy—big-time.

At 16 Alecia eloped to Reno, Nevada, with a musician in a band that had come to play at her high school—at least that’s what I was always told. He wasn’t much older than she was, and his family—lo and behold—were related to the Rockefellers. (The beau’s grand-father was an early business partner of John D. Rockefeller.) 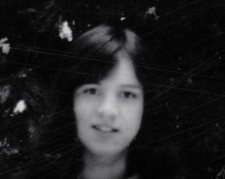 It was a difficult transition, no doubt, for my bohemian-Berkeley young aunt. In no time her new mother-in-law was demanding that the state of California proclaim the marriage null and void. The state declared it legal, so the mother-in-law proceeded to get them divorced.

The youngsters were separated and my aunt Alecia moved back home to Berkeley with her librarian father, mother and five siblings. By now she was pregnant, of course.

The birth of a girl made headlines, for the baby was technically an heiress, liable to inherit as much as 12 million, one newspaper estimate put it, in ’30s dollars. (You do the math: lots.) “Million-dollar baby born in Five ‘n Dime” was how my mother recalled the headlines: humiliating.

(This photo of Alecia was the one splashed all over the newspapers.)

My mother claimed it only brought them unhappiness. The “windfall” never amounted to much more than lives put on hold in anticipation of something that never really materialized.

But details have emerged from these old news clippings—and a story, or rather, a mystery, has seized me.

Alecia, 17, was in the hospital, having just given birth. Reporters and lawyers circled. The father of her estranged husband called her three times. And then he killed himself.

This, for me, is how stories begin: with something like a “story seizure,” attended by an aching, persevering curiosity. I long to know: Why was he repeatedly calling? Why did he kill himself? What was their relationship? How did the young mother feel?

But then, invariably: truth intervenes. The muddled truth. The story above is the one that burned itself into my imagination. But then, of course, I had to go back and review the facts. The father-in-law did not call Alecia in the hospital, but several years later (curious, still), begging her to get on a plane to come see him. And yes, that night, he did kill himself—according to Alecia. The inquest deemed it an accident.

My dedication reads: “In memory of my Aunt Alecia, the drama queen of my youth.”

Tags: The Next Novel, the writing process