I love the embellishment stage of writing a novel, that point at which the story is more or less (for the time being) gelling. Early on, the focus is on structure: parts, chapters, scenes. The cast; their characteristics.  As the novel evolves, the focus is closer in: on the dialogue, the paragraphs, the sentences, the words.

At this stage, I work with the on-line Oxford English Dictionary: oh, the glory of it!

Yesterday, I checked the word emotion and discovered that it’s a fairly modern word.  I should not have been surprised. This morning (it’s not even 8:00 am as I write this) (I shouldn’t be writing a blog, but getting on with The Revision) I checked the word guilty. Ah, it’s an ancient word, with a delicious pallet of colours:

guiltful (I do love all these “ful” words)

This last is the one I will use, at least for the time being. I hope to send this draft (#3) to my agent tomorrow. And so, guiltful for blogging, I return to my task.

(I know, I promised a post on titles…tomorrow: after I’ve sent IT off?)

Question: What ancient word do you love?

Vomitorium adlubescence: In praise of the OED 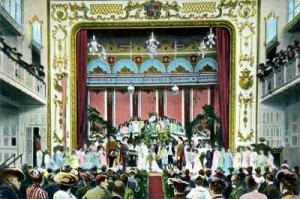 Historical novelist Tasha Alexander and I tweeted back and forth this morning, praising the Oxford English Dictionary.

It just gets better and better. Through a library—the wonder of libraries!—I have on-line access not only to the OED itself, but to its Historical Thesaurus. Can there be a more useful tool for a history geek?

Because my focus right now is on 17th century theatre, I’ve been assembling theatrical vocabulary using the OED, delighting in this research.

From the Greeks, we have proscenium, for example. We use the term proscenium arch today, referring to the frame through which we view the world of the play. In ancient Greek and Roman theatres, however, the proscenium was simply that area between the sets and edge of the stage.

One word I love—and am trying to work into the novel, if I dare—is vomitorium, the passage leading to the seats. A curious word, but it does conjure up the flowing image of the crowds of people leaving the performance.

If you are at all interested in the workings of the OED, and the delicious origin of words, there are some very good short videos on the Oxford University Press blog: here.