The challenges of writing a sequel, prequel, interquel or paraquel

One of my readers sends me facinating questions. Here is the latest:

How are you going to deal with the fact that you wrote about most of these characters in your last book? Do they have the same personalities they did previously, as they would in a proper sequel, like Tales of Passion, Tales of Woe? Or do you look at this as a completely different novel, and, as such, a fresh break from the previous book’s tone, point of view and characterizations?

The Sun Court novels are “paraquels”: they take place roughly in the same place, at the same time, and involve many of the same characters. In some instances, they share the same scenes, although from different perspectives.

In some respects, they pose more of a challenge for me than the Josephine B. Trilogy. For the Trilogy, the cast of characters changed dramatically from one novel to the next, and the novels were sequential. The characters that remained the same throughout matured and changed. 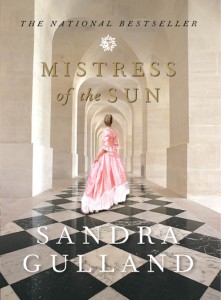 For the novel I’m writing now, I’m already regretting a few of the sentences in Mistress of the Sun. (In fact, I may revise a scene or two when I bring Mistress out in ebook under Sandra Gulalnd Ink.)

I know more now about what happened, for one thing. That’s inevitable—but also, the story itself demands certain changes.

I decided early on to be true to the story, even if it contradicted some of the things that happened in Mistress. The problem scenes are brief—merely a sentence or two; I might award readers who are tenatious enough to discover the disconnect!

I’m not sure how I’d confront these questions if I were in your shoes, but I actually think it’s a great problem to have. Revisiting the same universe in different novels creates quite a rich tapestry from which an author can draw — not only because of the density of characters and stories that build up, but because of the possibility of added layers of meaning.

Thank you so much for this observation—so true.

Some of The Next Novel explores the world of 17th century theatre, a world away from the Court, so there is added perspective on that period, a layering on of perspectives: a rich tapestry, as you say.

On the work front, I’m just about finished changing The Next Novel from 3rd person to 1st. It has taken me three days! I’m looking forward to reading it through. In a week I’m going to be sending it to another of my very best readers, the wonderful editor and writer Fiona Foster.

In terms of Sandra Gulland Ink, my e-book publishing venture, I’ve found someone (though elance.com) in Romania to retype and format my Trilogy. I hope that that process will be finished this month.

I will then have to reread and proof the Trilogy files—which works out perfectly, as it turns out, because I’m going to France in September to be interviewed on film for a documentary about Josephine. (More on that to come.) I’ve been away from Josephine’s world for well over a decade; I’m looking forward to returning.

My holiday reading this wonderful summer long weekend is Brooklyn by Colm Toibin. What’s yours?