The charm of voting in a rural community 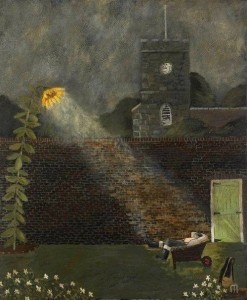 It was voting day today. My husband and I went at 5:30, both of us unsure where we would put our mark (as no doubt many in Ontario felt).

It was a 1-minute drive to the parish hall. The “officiates,” an older woman and a young back-to-the-land sort, were just coming in from a break. We were the only ones in the big room. “Do you know John Gulland?” the young man asked. “Yes, he’s my brother,” Richard said. “He was in earlier,” we were told.

“Do you count?” I asked (meaning the ballots), and he said, “Yes, since I was four,” and we all laughed. Five more voters arrived as we were leaving, two of them good friends.

I wonder how Chet remembers that day, wonder if he thinks of it as wonderfully small-town charming. I also remember seeing a bear cross the road on the way home. It was one of those memorable days.

About the image: I’m sorry, but I don’t know who the artist is. For some inexplicable reason, it feels like it suits. Haunting, isn’t it?