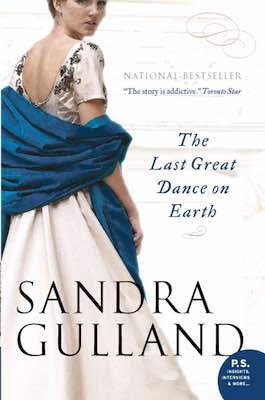 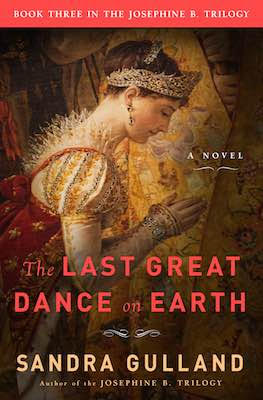 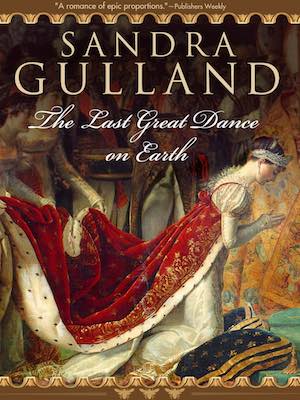 The Last Great Dance on Earth

“Did she know how much we loved her?”

A novel about an enduring love set against the opulence and treachery of the Empire years; Josephine’s life from 1799 to her death in 1814 at the age of 50.

The Last Great Dance on Earth is the triumphant final volume of Sandra Gulland’s beloved trilogy based on the life of Josephine Bonaparte. When the novel opens, Josephine and Napoleon have been married for four tumultuous years.
Napoleon is Josephine’s great love, and she his. But their passionate union is troubled from within, as Josephine is unable to produce an heir, and from without, as England makes war against France and Napoleon’s Corsican clan makes war against his wife.
Through Josephine’s heartfelt diary entries, we witness the personal betrayals and political intrigues that will finally drive them apart, culminating in Josephine’s greatest tragedy: her divorce from Napoleon and his exile to Elba. The Last Great Dance on Earth is historical fiction on a grand scale and the stirring conclusion to an unforgettable love story.

“Riveting … Never has this near-mythic figure seemed more human.” —Robin Maxwell, author of The Secret Diary of Anne Boleyn
“… addictive.” —Edmonton Journal
“… a romance of epic proportions.” —Publishers Weekly
“… truly engrossing … .” —The Scotsman
“Wonderfully evocative… A guilty pleasure—at each page you say, ‘just one more’ and keep on. Josephine—what a woman. What a love! What a life!” —Margaret George, author of The Memoirs of Cleopatra: A Novel
“In all of time, no love story surpasses that of Napoleon and Josephine. The Last Great Dance on Earthdraws us into the heart and soul of their story, capturing all the agony and glory.” —Faith Sullivan, author of The Cape Ann

For discussion suggestions, click here. For a Q & A about Josephine, click here. “Walking in Josephine’s Shoes” Sandra Gulland is so obsessed by Josephine Bonaparte that she sometimes writes cheques with the date 1800. She tells Alexandra Gill how her best-selling trilogy about Napoleon’s wife changed her life. By Alexandra Gill for The Globe & Mail, Saturday, November 4, 2000 Watch Napoleon, the PBS documentary, which I was honoured to be interviewed for—and especially honoured that French historians had been the ones to bring me to the attention of the director. To read about my research: click here.

1. “It is the season of renewal, yet I remain barren — in spite of love, in spite of prayers,” Josephine writes in her diary as The Last Great Dance on Earth opens. Her longing to conceive a child with Napoleon is one of the central themes of the story.
Compare Josephine’s frustrations with their childlessness with Napoleon’s.
How does Napoleon’s attitude toward the need for a male heir change over the course of the novel?
2. When Napoleon first tells Josephine that his advisers recommend a hereditary system of succession, believing it would put an end to the constant threats against his life, Napoleon is careful to assure Josephine that he is insisting on his right to adopt one of his brothers’ sons as his heir.
Do you think the whole course of history would have been different and Napoleon and Josephine would have remained married had Little Napoleon, the much loved nephew he planned to make his heir, lived?
Why or why not?
3. After one of Napoleon’s flings, Josephine decides to make him “pay” by purchasing expensive clothes and baubles. Is Sandra Gulland lending support to the portrait of Josephine as a spendthrift that some historians have put forth, or is she making you think about why she might have spent so much?
This is a minor example of how Sandra Gulland uses story and character to question existing interpretations of historical facts. How does this minor example make you think differently about what we think we “know” about history?
4. After another of Napoleon’s affairs, Josephine weeps tears of despair and confides in her diary: “I imagine her young, supple body — so responsive and fertile — and I feel withered within.”
Discuss how Josephine’s reaction to Napoleon’s repeated infidelities was affected by her age, by her infertility, and by the public nature of his betrayals.
How were the roles of husbands and wives and the expectations of fidelity different in France in Josephine’s day from those in our own country today?
How do you imagine Josephine might have coped with the kind of intense public scrutiny of a husband’s amorous adventures that Hillary Clinton had to deal with in the Jennifer Flowers and Monica Lewinsky scandals?
5. As the adulation showered upon Napoleon reaches a fevered pitch and spurs a movement to name him First Consul for Life with the right to name a successor, Josephine has misgivings. “Sometimes I worry that in striving to become legitimate in the eyes of the world, we are becoming what we fought so hard to change,” Josephine confides in her friend Thérèse.
In what ways are Napoleon and his aides and police becoming what they fought so hard to change? Talk about the perilous realities Napoleon faced — constant death threats at home and war abroad — and how they can lead to autocratic rule or an encroachment on civil liberties for citizens.
What other times in history can you think of when political revolutions or reform movements have changed in character when the revolutionaries took power?
6. How does Josephine’s presence at the head of Napoleon’s household support his reign? Does her aristocratic background give the rough-and-tumble Bonaparte clan some polish, class, and legitimacy?
Is she a civilizing presence in the Bonaparte family?
Does her presence keep the boorish behavior and political manipulation of the Bonaparte family in check, or merely better hidden?
7. Early in the book, pressed continually by members of the greedy and grasping Bonaparte clan for some of the spoils of victory, Napoleon is quick to assert: “The French Republic is not a family fiefdom.”
Why, then, after his coronation as Emperor, does he grant undeserving family members patronage appointments?
Are we to see his actions as a necessary concession to practical realities, or an abandonment of principle?8. When Napoleon and Josephine are crowned Emperor and Empress, Josephine longs for the “delicious freedom of being a simple citizen.”
Discuss the rewards and the drawbacks of living up to a great position and power. In what ways do Josephine’s yearning for privacy and spontaneity and her strafing at the restrictions imposed by the rituals of her new station in life remind you of such contemporary figures as Princess Diana and Jacqueline Kennedy?
In what ways were their circumstances the same or different from Josephine’s?
What other factors could be contributing to the sentiment Josephine expresses in a letter to her son Eugène: “How unhappy a throne makes one”?

9. “You are surrounded by flatterers, Bonaparte. They delude you,” Josephine cautions her husband. Does he want the truth or homage? “It is not the Emperor I love, but the man. And who else loves him?” she writes in her diary.
Discuss the difficulty of knowing whom to trust when you are in a position of power and people fawn over you.
What is Josephine’s value to Napoleon as a confidante and sounding board. Which of them better sees the truth about people? Does this change during the course of the novel?
10. When Napoleon finally decides he must divorce Josephine, why does he defend the choice as “the calling of destiny, a great and noble sacrifice”?
Do you think he is being truthful with himself?
Does he have other choices?
Josephine also sees the decision as linked to destiny. But she sees it as a tragic error both for them as individuals and for France. Is she being truthful with herself? “Destiny has been crossed; the downward slide will now begin,” she warns.
What role does destiny play in the novel, and what are we to make of the fact that Napoleon and Josephine view the calling of destiny so differently?
11. Napoleon’s willingness to leave Josephine for an heir stands in stark contrast to the Duke of Windsor’s abdication of the throne for Wallace Simpson. Discuss the choice each man faced between the conflicting claims of duty and personal happiness.
Does Napoleon’s choice necessarily demonstrate a greater love of country and devotion to duty?
Does the Duke of Windsor’s choice necessarily mean that his love for a woman was deeper and more passionate than Napoleon’s? Why?
What other factors influenced their decisions?
12. How much did you know about Napoleon and Josephine before reading this book?
Did the novel change the opinion you had of them? How?
Sandra Gulland opens a very narrow window on the Napoleonic era by telling her story entirely through Josephine’s fictionalized diary entries. In what ways does this approach to the historical novel enrich our understanding of the period and in what ways does it limit it?
Can you think of another historical period that you might like to view through the intimate lens of one woman’s diary?
13. Author Sandra Gulland, in writing and talking about her trilogy, has described Josephine as “a woman more of our time than her own.”
Do you agree or disagree? Why?
Loading Comments...