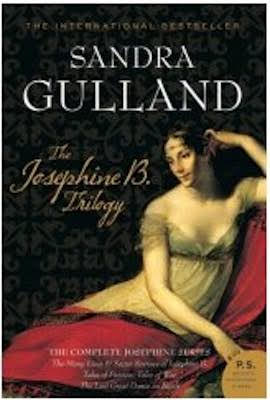 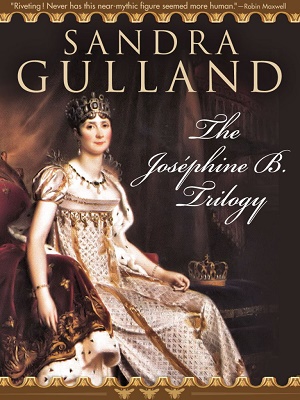 The Josephine B. Trilogy

The whole of the Josephine B. Trilogy: The Many Lives & Secret Sorrows of Josephine B; Tales of Passion, Tales of Woe; The Last Great Dance on Earth.

The Many Lives & Secret Sorrows of Josephine B. is a sweeping, dramatic tale of romance, heartbreak, and political intrigue set during the tumultuous times of the French Revolution. Combining meticulously researched history and superb storytelling, author Sandra Gulland provides an intimate look into the lives of the men and women behind the revolution and relates Josephine Bonaparte’s marvelous, perilous rise from an innocent girl to one of the most sophisticated and powerful women in history. The story opens in 1777 on the island of Martinique, where the young Josephine hears three predictions about her future: she will have an unhappy marriage, she will be widowed, and she will be Queen. Soon after, Josephine is sent to Paris to marry Alexandre de Beauharnais, and there her fortune unfolds. Through her fictionalized diary entries, readers learn of the birth of her two children and the dissolution of her marriage due to her husband’s indiscretions. She tells of her days of imprisonment during the bloody French Revolution and of the fall of the French monarchy. Finally, she writes of her husband’s execution and of her fateful meeting with Napoleon Bonaparte with whom she will fulfill her destiny as Empress Josephine. A richly detailed story, filled with the emotions of a young woman and a country under siege, The Many Lives & Secret Sorrows of Josephine B. takes readers on a fascinating journey into the heart of one woman whose destiny became inextricably entwined in the history of a nation. Tales of Passion, Tales of Woe begins on the day after Josephine’s marriage to the “Corsican” Napoleon, a mournful woman, beset by doubts, fearful of her children’s reaction to her marriage and what the future may hold for all of them. For France is in a state of flux. Though the dreaded Reign of Terror was ended and its architect Robespierre was dead, political intrigue is a plague on the land. Only two days after their marriage, Napoleon leaves Paris to take command of the Army of Italy; a month later in April 1796, he opens his Italian campaign and ultimately proclaims six victories. Josephine writes of her husband’s triumphs and defeats, but it is the stresses of daily life that occupy her: the welfare of her children, aiding friends who plead for the benefit of her political contacts, the running of the household and the constant need for money to support the life that is appropriate to a woman of her station. Her marriage was little help in this regard; though Napoleon provided some funds for the running of the household, Josephine was expected to contribute the rest from her own pocket. She is further cursed with Napoleon’s family: a mother-in-law who despises her, three selfish sisters-in-law and four greedy brothers-in-law. Though she attempts at first to charm them, it is quickly evident that nothing can defang this nest of vipers with their thinly veiled insults regarding the six-year difference in age between Josephine and Napoleon, he being twenty-six and she thirty-two at the time of their marriage. Perhaps most cruel of all is her inability to conceive a child, an issue that will eventually threaten her marriage. One of the most startling aspects of Tales of Passion, Tales of Woe is its many parallels to late-twentieth-century life. The manners and morals of the time, the political machinations and intrigues, the profligate spending without thought of tomorrow are all mirrored in the events we see today. Here are moralists and the licentious side by side; here friendships are cast aside in favor of political power; here true friends of the republic fall as opportunists rise. But beyond politics and at its core, Tales of Passion, Tales of Woe recalls the extraordinary love story of the remarkable woman who captivated the man destined to change the world. The Last Great Dance on Earth is the triumphant final volume of Sandra Gulland’s beloved trilogy based on the life of Josephine Bonaparte. When the novel opens, Josephine and Napoleon have been married for four tumultuous years. Napoleon is Josephine’s great love, and she his. But their passionate union is troubled from within, as Josephine is unable to produce an heir, and from without, as England makes war against France and Napoleon’s Corsican clan makes war against his wife. Through Josephine’s heartfelt diary entries, we witness the personal betrayals and political intrigues that will finally drive them apart, culminating in Josephine’s greatest tragedy: her divorce from Napoleon and his exile to Elba. The Last Great Dance on Earth is historical fiction on a grand scale and the stirring conclusion to an unforgettable love story.

From The Many Lives & Secret Sorrows of Josephine B., the first in the trilogy:

“What a joy! Historical fiction with equal measures heart, soul, and intellect. With complete authority and searing intimacy, Ms. Gulland has captured and delivered to us the voice of one of history’s most fascinating women. Thoroughly compulsive reading.” —Robin Maxwell, author of The Secret Diary of Anne Boleyn

“The rich tapestry of this trilogy is not to be missed.” —The Historical Novels Review

“A three-part beach book with brains and style.” —The Toronto Globe & Mail

“With spare yet elegant prose, Gulland transports the reader back in time.”—Theresa Eckford for the Historical Novel Society

“From the opening sentence until the very last word, I was captivated.”—Bygone Days

‘This is a truly glorious trilogy. Impeccably researched and beautifully written, Sandra Gulland really gets beneath the skin of her subject, creating a truly empathetic portrait of one of modern history’s most fascinating women.’ —Andrea Stuart, author of the biography Josephine.

I get notes from readers through email or Facebook or Twitter. Each one touches me greatly. Here are quotes from a few:

I devoured all three books in a week and loved every single word.

“One warning: These books are addicting and your children may suffer from neglect for a couple of days while you read.”

“I just finished your trilogy today and could not put the last book down until it was done. My entire day at work, as a bank teller, was completely CONSUMED with Josephine. I cried all day long.”

“With a history degree and two English degrees under my belt, it’s safe to say I’m a big fan of historical fiction. It’s also safe to say that the best histfic I’ve ever read is Sandra Gulland’s Josephine trilogy.”

“In this first of three books inspired by the life of Josephine Bonaparte, Sandra Gulland has created a novel of immense and magical proportions.” **highly recommended**

“I have never emailed an author before, but I just have to thank you for writing the Josephine series. … I’m afraid to finish…I will feel like I’ve lost a great friend.”

“I just wanted to tell you that you are by far my favorite author. You made the mystery of Josephine come alive for me.”

“I have already heard from many of the women who have said they couldn’t put the book down – I’m SO not surprised! I basically touted it as the historical novel for people who don’t generally like ‘historical novels’ – It’s sort of a sure thing!”

“Your book is so good! I read it by mistake at a friends house and was over-whelmed! i’m eleven.”

“Somehow Gulland is able to almost immediately create a bond (esp. for me) between reader and characters.”

“I just finished your Josephine trilogy, and I found it absolutely fascinating.”

“I am totally blown away by your magnificent Trilogy on Josephine. I can’t put it down.”

“I have just read The Many Lives & Secrets Sorrows of Josephine B. and Tales of Sorrow, Tales of Woe. I loved them so much! I read them both in under a week. I’m now reading The Last Great Dance on Earth. It breaks my heart that I’ll be done with this trilogy. Thank you for being wonderful!”

“Love, love, love. Love it so much, in fact, that I’ve read the series six times. I might read it again this week. Highly recommend.”

“I am in awe! I literally devoured the books, one right after the other! Fantastic!”

“I have to tell you that I finished the Josephine trilogy last month and every other book I have tried to pick up has paled in comparison. I felt as though I had lost my best friend after I was done with it.”

“I could not get enough of the Josephine Bonaparte trilogy! It was absolutely beyond addicting — I could not put them down, not for a second!”

“I have raved about your Josephine trilogy until everyone glazed over. I have passed them around and when they got stuck midstream somewhere, the next person on the list would beg me to force the culprit to finish and pass it on. We are a definite fan club in my circle!”

“I just reread the Trilogy this last week. And don’t think I am a psycho fan for saying this, but I used a line out of the second book in a tattoo I recently had done: Small Deceits Destroy Faith.”

“I have never loved historical novels but these books have changed my mind. Your words conjured up a magical world that I so enjoyed walking through. I am urging all my friends to read your books.”

“I just want to say that reading your Josephine B. trilogy has so greatly affected me, I really can not put into words how much I enjoyed them. I simply could not put them down.”

“I have just finished the Josephine B. Triology – thank you for one of the best reading experiences I have had in a long time.”

For discussion suggestions, see those listed for each of the novels in the Trilogy: The Many Lives & Secret Sorrows of Josephine B, Tales of Passion, Tales of Woe, The Last Great Dance on Earth. For a Q & A about Josephine, click here.“Thank you, Josephine: Destiny has smiled on historical fiction writer Sandra Gulland” Watch Napoleon, the PBS documentary, which I was honoured to be interviewed for—and especially honoured that French historians had been the ones to bring me to the attention of the director.

For discussion suggestions, see those listed for each of the novels in the Trilogy:

The Many Lives & Secret Sorrows of Josephine B,
Tales of Passion, Tales of Woe,
The Last Great Dance on Earth.