The tai chi of inspiration 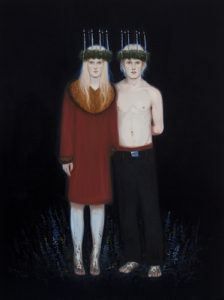 I went to Toronto this week to go to the book launch of friend Victoria Zackheim’s anthology—He Said What? (a wonderful book)—as well as to see Kris Knight’s art exhibit, “Tragic Kingdom.”

Kris tweeted long ago that he was working on the paintings for this show. I didn’t know Kris from Adam, but what caught my attention was that he mentioned that he was inspired by the work of three authors: one of whom was me.

I immediately responded that this was a show I very much wanted to see. Last week he let me know that the show was opening, and I immediately made plans. I had to see it.

One of the most gratifying and also surprising things about becoming a writer is when other creatives—artists, poets, dancers, actors—are inspired by your work and create something from that. It’s an intimate and meaningful connection.

Claire Naylor, who twice performed a one-woman show based on Josephine B. at the Edinburgh Fringe Festival, has since become a dear friend. I wept seeing a video of her performance.

Rachel Maes, then a high school student, sent me a long poem she’d written about Josephine. She and her mother came to my reading in Illinois and she told me how much my work meant to her. (She’s read the Trilogy six times!) I wept, I was so moved, sending book store staff scrambling for tissue. Now Rachel has graduated from university and has married; I see her often on my FaceBook page.

Beckah Reed (formerly Voigh) is a dancer in St. Louis. She performed a one-woman show on Josephine. Yes, you guessed it: I wept watching the video. When I was in St. Louis on tour, we met. I felt she was a sister. I was exhausted from the tour, and she kindly offered “energy work”—which sounded immensely appealing.

It was a profoundly relaxing as well as moving experience. Beckah “saw” Diablo, the horse in Mistress of the Sun, a novel she knew nothing about. I’ve worked with her since, and she’s given me images that resonated, things I’ve incorporated into the novel I’m writing now.

Again, it seems a movement of creative energy back and forth, back and forth. I think of it as the chi of tai chi (my personal definition).

And now, Kris Knight: such beautiful paintings! There they all are—the Merveilluses, the Incroyables, the Dauphin, the Prince Parvenu—citizens of a lost and yes tragic kingdom, brave in their candle crowns.

If you ever have a chance to see Kris’s work, do go. (He shows in Toronto, New York, London and Amsterdam.)

One of the paintings in this show expressed, to me, the spirit of a book I’m planning to write in the future. I’m thrilled—thrilled!—to say that my husband and I have just bought The High and the Mighty (see image above).

“In his new series, Toronto-based artist Kris Knight paints a makeshift misfit kingdom that revolves around the narrative of a romantic secret society. Drawing from personal histories of rural escapism through imagination, Knight paints disenchanted youths who long for the drama and grandeur of the old world dynasties.”