The wonder of Penelope Fitzgerald 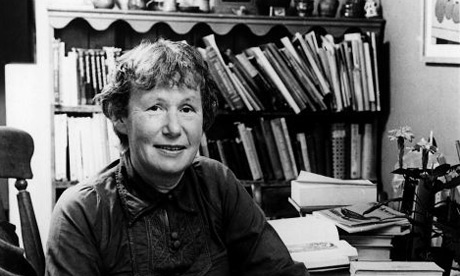 Penelope Fitzgerald‘s Offshore and The Blue Flower are on my list of all-time great novels, but what I love best about her is that she didn’t start writing until her late-50s.
To quote from the Guardian book blog, “The quiet genius of Penelope Fitzgerald”:

Fitzgerald was a wonderful writer, and since her death in 2000 her reputation has continued to soar. Despite a late start (she began writing her first novel when she was almost 60, composing it as a diversion for her dying husband), she gained immense popular and critical acclaim during the last 20 years of her life. She won the Booker (for Offshore), and became the first non-American to win the National Book Critics’ Circle award (for The Blue Flower, which many consider her masterpiece). In the eight years since her death, an increasing number of readers—including AS Byatt, Frank Kermode and Hermione Lee—have begun speaking of her as the greatest English novelist of recent decades.

I heard Penelope Fitzgerald interviewed by Eleanor Wachtel on the CBC radio show, Writers & Company. I was struck by her account: her first novel was a mystery. Accepted for publication, her editor asked her to cut it by half. She did so, and continued to do so for every book she wrote.

A good lesson, that.