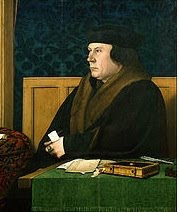 I highly recommend this wonderful article by Hilary Mantel, on researching Wolf Hall. I admire this writer more and more. (I had something to say about her writing in my previous post.)

“How It Must Have Been” is an insightful review of Wolf Hall by Stephen Greenblatt in the New York Review of Books. He has a lot of interesting things to say about Cromwell and the nature of historical fiction.

Greenblatt asks: What is historical fiction? His definition is more narrow than I would have it, focusing on known characters and events:

At issue then is not merely the setting in an era different from the present of the novelist, the interest in significant historical events, and the representation of identifiable, documented historical actors, though all of these are important in establishing the parameters of the form.

Historical novels have a further characteristic. They generate a sense in the reader best summed up in exclamations like “Yes, this is the way it must have been”; “This is how they must have sounded”; “This is what it must have felt like.”

And further: “The historical novel then is always an act of conjuring.” (As is true of all fiction.)

The historical novel … offers the dream of full access, access to what went on behind closed doors, off the record, in private, when no one was listening or recording.

Greenblatt and other reviewers have noted Mantel’s unique point-of-view in this novel.

Mantel contrives a telling effect by often referring to Cromwell as “he” without further identification, so that in many sentences the reader must figure out where, in a welter of “he’s” and “him’s,” Cromwell is

Here is an example of the sometimes disorientating use of “he”:

“Master Cromwell,” he says lightly, “either my calculations are wrong, or the universe is not as we think it.”

He says, “Why are comets bad signs?…”

The first speaker is the king’s astronomer, and normally, the second “he” would refer back to him. Not in this novel. The second he—”He says”—is Cromwell speaking … always Cromwell. It’s effective, but it takes a little getting used to.

Very well. I dry my tears, those tears from All Hallows day. I sit with the cardinal, by the fire at Esher in a room with a smoking chimney. (page 162, Canadian edition)

This passage stands out. It is a rare use of the first person voice. This passage would normally have read: Very well. He dries his tears, those tears from All Hallows day. He sits with the cardinal, by the fire at Esher in a room with a smoking chimney.

But as I said: just a hunch.

I’m in the middle of the novel now, and I’m having a little difficulty with the transition. Wolsey, wonderful Wolsey, has died, and Cromwell now serves King Henry VIII. There isn’t the same emotional connection. Cromwell has lost his bearings, and so have I. I’m confident, however, that we will make it through.