A Diamond is a Man’s Best Friend: the history of the Regent Diamond 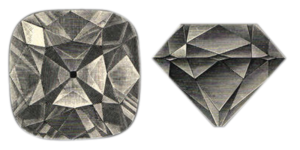 There is something about a diamond — especially a very, very large diamond — that lends itself to adventure.

In reading The Moneymaker by Janet Gleeson, a biography of the remarkable John Law (philanderer, gambler, murderer and the founder of modern finance), I came upon a short account of a diamond.

According to Saint-Simon, the gem came from India, where an employee of a diamond mine managed to smuggle out a 140-carat stone … in his rectum. How he managed this is unknown, for it was the custom for all people handling the stones to be searched and given a purgative the day before being allowed to leave. (I leave the details to you to imagine.)

But the diamond got out and changed hands a few times before being sold for twenty thousand pounds to Thomas Pitt, governor of the English East India Company at Fort Madras. (Thereafter, Thomas was known as Diamond Pitt.)

Nobody had ever seen such a large stone. Pitt sent it to London for cutting. The stone that resulted was, to quote Saint-Simone, “the size of a Reine Claude plum, almost round in shape, … perfectly white, free from all blemish.” It was said to “eclipse all others in Europe.”

It was a time of war and financial uncertaintly: such a diamond was not easy for Pitt to sell. Even the Sun King, who had a fondness for diamonds, refused it.

In 1717, Pitt returned to Paris, still trying to sell his stone. John Law had a number of schemes, all requiring the sponsorship — or, at least, approval — of the Regent, Orléans. With the help of Saint-Simon, Law was able, with difficulty (the times were impoverished and troubled), to persuade the Regent to buy the diamond, and in doing so, reinforce France’s status in the world and that of the Regent, as well.

Whether or not that was the right thing to do, the Regent bought the diamond for two million livres (on credit). It was set in the crown of Louis XV during his coronation, and adorned one of Marie Antoinette’s hats. It was stolen during the Revolution, but recovered, to be set into Napoleon’s ceremonial sword in 1801 (detail above).

Today the Regent Diamond can be seen in the Galerie d’Apollon in the Louvre.

The Moneymaker, by the way, is a fascinating book, and quite relevant to our times. I recommend it.