A quiet week for Louis XIV 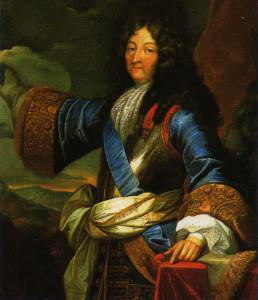 There isn’t a great deal in the news this week with respect to Louis XIV (other than the usual items for auction), but an announcement of a performance by Princeton’s Dryden Ensemble has me wishing I could be there.

ng wanted to put together a show based on the letters of Elisabeth-Charlotte, Duchesse d’Orléans. She lined up Canadian actress Roberta Maxwell to read excerpts from the letters, and another Canadian, actor Paul Hecht to portray the Duc de Saint-Simon. All this is interwoven with music, as it was at Versailles during the Court of the Sun King.

The musical program naturally features the crème de la crème of the French school. It includes dances from Lully’s opera “Armide,” Louis Couperin’s Suite in F Major for solo harpsichord, the Prélude and Muzettes from Marais’ Suite in A Minor from “Pièces de violes” and his “Sonate à la Maresienne” for violin and continuo.

… and more. It sounds so delicious I can hardly stand it.