A slice of 17th century life: a letter in translation (part I) 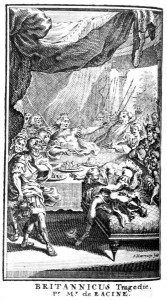 I’ve begun translating (rather freely) a letter written by Marquis D’ Hernouville on December 30, 1669, from Paris. I love how it gives a slice of 17th century life, especially with respect to the court and theatre.

I  am taking advantage of a cold which is keeping me near my fire for a few days to give you news of this country.

The most important news—and that which will interest you the most—is that M. de Guise got permission to use a carreau when he attends the King’s mass. He did not fail to take advantage of this on Sunday, and—just between us—did so with a little too much display.

The carreau was a small velvet cushion used for kneeling on in church. The privilege was accorded to a duke and duchess. Important ladies of the court were called dames à carreau.

The Duke De Vermandois has just been made an admiral. Madame de la Vallière received this mark of distinguished favour with perfect indifference. I agree with you that this woman is not meant for her position.

This is a beautiful snippet, illuminating the indifference of Louise de la Valière, the King’s mistress, to royal favours—and the contempt courtiers had for her as a result.

Did your brother tell you that we went to the opening of “Britannicus” together? Supporters of Racine praised it. Not being able to get a box, I sent my servant at ten in the morning to reserve a place. [Because of the crowd] I feared I would never get into the theatre. I left my carriage at the entry on Mauconseil. Without Vault and Mauvilain, who know all the actors of Paris, I would never have managed [to get in].

Do not misinterpret this public eagerness: people came with more ill will than curiosity.

I paid my respects to Madame De Sévigné in her box, where there was also Mesdames De Villars, De Coulanges and De Fayette, escorted by Abbot De Villars and the frondeur De Grignan.

I’ll let you decide if “Britannicus” had good reception in this crowd.

He is speaking in jest: this is the pro-Corneille cabal.

What amazes me more than anything is the presumption of this schoolboy, who dares to make Romans speak in the manner of our sublime Corneille.

For the original French of this letter to lieutenant général Gaston de Mornay from comte de Montchevreuil, click here or here (page 5). For another translation into English, see page 99 of The Paris Spectator on Books Google.

{Image: Britannicus, Act 5, Scene 5, from the edition of the play published in 1699, as cited on www.Cesar.org.uk}