Discovering the Age of Discomfort 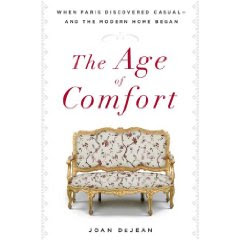 Dejean is the meticulous author-historian of the wonderful book, The Essence of Style: How the French Invented High Fashion, Fine Food, Chic Cafés, Style, Sophistication, and Glamour.

I’m learning a great deal from this wonderful book: not only about how the concept of comfort came into being, but also, at the same time, I’m gaining a deeper understanding of how uncomfortable everything had been before.

Before, into the 1670s, all that mattered in a home was magnificence: fancy façades, enormous rooms, jaw-dropping furnishings. The primary task of architecture was to show status. Casual could not even be considered because one was always on display, rigidly encased in stiff clothes, sitting on hard wooden stools.

Before the “Age of Comfort” dawned ? and it dawned rather suddenly at the tail-end of the 17th century ? one was always in company. Like pack-animals, people slept, bathed, and relieved themselves in company. Homes were composed of a few, large undivided rooms. A dining table would be set up anywhere. A bathtub would be set up in the warmest room ? usually the kitchen.

Hand-in-hand with the concept of comfort came the concept of privacy, and everything changed: the furniture, the lay-out of the rooms, the size and number of rooms, how one dressed, sat, entertained. How one slept, bathed, relieved oneself ? privately. (I won’t be surprised if this new concept of a private space, where one could be at ease, engendered a more introspective psychology, and with it the value put on individuality.)

This remarkable revolution began with … gowns. In January of 1678, a French newspaper with a large European readership published the big news: “In France today, people only want to live comfortably.” The very word ? commodité ? had never been used. It all had to do with a fashion at Court: women were rebelling against the rigid grand habit in favor of a less confining dress. 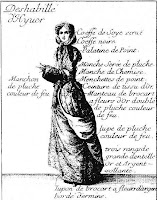 And, with that, of course, came the complete unraveling of all moral standards. Listen to this account from Princess Palantine, that Germanic upholder of traditional values:

“At Trianon … all the men now sit down in the presence of M. the Dauphin and Madame the Duchesse de Bourgogne; some of them are even stretched out full-length on sofas …. You can’t imagine what it’s like here because it no longer looks at all like a court.”

On-line articles on Dejean’s book:
“How the sofa changed the world” by Heather A. Davis, Penn Current
“The Couch Potato Was Born in Paris” by Julie Scelfo, New York Times