Searching for a mention of my heroine’s mother in La Muze Historique, a 17th century news/gossip-sheet in rhyme (!), I came upon, quite by accident, an interesting account of an early transport system in Paris. Bear with me, for this is rather fun …

In January of 1662?a winter of severe cold and famine?three noblemen applied for a patent allowing them to run carrosses (enclosed coaches) on defined routes across Paris. They proposed to charge 5 sols for the entire route, less proportionately. (A pound of bread cost about half a sol, so this was roughly?very roughly?equivalent to ten pounds of bread.) Their intention was to provide transportation for those who did not have the means to hire a chaise or coach. Vehicles would be stationed at convenient spots, and scheduled to run a specific times, empty or not. In short: a bus system.

The Excluded Permission was granted, but with the puzzling qualification that the carrosses could not be used by soldiers, pages, servants in livery, workmen or labourers. Was this to ensure that the conveyances would appeal to the middle class? I suspect so. 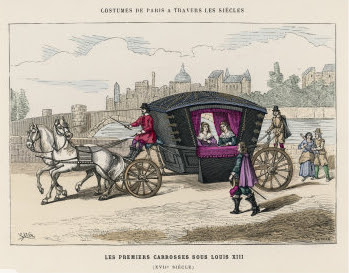 (Above: a French carrosse. The carrosses used for transit were also pulled by two-horses, but seated six, according to this source, or eight, according to another?so it may have been bigger. Each coach was numbered on the side with one to four fleurs-de-lis and showed the Paris arms and blazons on the panels.)

The entrepreneurs tested the strength of two horses for two days mid-February, starting at 6:00 a.m. and making four routes before 11:00, and four more between 2:30 and 6:00.

The test was apparently passed, for two months later, seven vehicles began on March 18, running from Porte St. Antoine to the Luxembourg (the route laid out on placards). But the populace?the excluded impoverished, I suspect?followed behind hooting, violently dissatisfied. It was not a successful first run.

The Affair of the Coaches The experiment was put off, and two months later The Affair of the Coaches (as it was called) was launched yet again on May 20, Saturday, before 7:00 a.m. “with an éclat and a pomp quite astonishing.” The difference, this time, was the pomp, but also the threat: accompanying the coaches at each end of the route were two commissaries in robes, four guards, and about two dozen archers and horsemen.

When everything was ready, the Commissaries “exhorted the bourgeois to render it every assistance, and threatened the lower class of people that if the slightest insult was offered, the severest punishment should follow?and this they said de la part du Roi.” 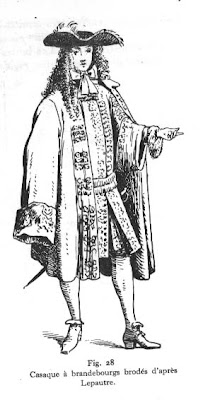 As for éclat… As for éclat, the coachmen were given capes (casaques) in the colours of the King, with the royal and city arms embroidered on them.  With a guard in each coach and archers and horsemen stationed all along the route, the first coach set out, to be followed by the next at 15 minute intervals. (The process was mirrored at the opposite end of the route.)

The day went off without “the slightest disorder,” no doubt thanks to the guards, archers and horsemen.  It had become, instead of a riot, an Event. Crowds gathered to watch the coaches pass and little work got done.

The first hitch
The next day, there were “even many women among the occupants”?but by the afternoon there was such a press of a crowd that people couldn’t get near.

“…a number of persons assemble to take their places, and, on the arrival of a coach, find it full. This is provoking; but they console themselves by thinking that another will arrive in a quarter of an hour; however, when the second comes, it is full also…”

Soon after, two more routes were added. When the service began to be used by auditors, councillors and courtiers going to the chatelet and the palace, the price was raised. The same system was instituted in St. Germain, where once King Louis XIV rode on one. Over the course of a few years, however, the enterprise was discontinued.

The quotes above are from a letter by Madame Perrier (Pascal’s sister) to Arnauld de Pomponne on Sunday, May 21, 1662, from Paris (with a footnote by her brother Pascal, who is credited with creating the system).