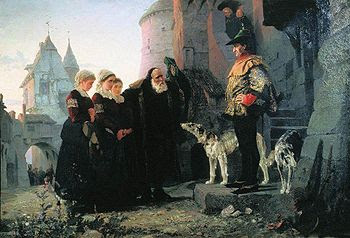 
Le droit de seigneur, or the “right of the first night,” is commonly understood to be the right of the lord of an estate to take the virginity of the bride or daughter of a serf working his land.

Fact or fiction?
I’ve read that there was no evidence to support the belief that this was, in fact, a custom of the Middle Ages, that le droit de seigneur was a fiction people had created about the past. (A lively fiction, in fact: Voltaire wrote a five-act comedy based on it, as is Beaumarchais’s The Marriage of Figaro and the movie Braveheart, to name a few.)

Therefore, I was rather interested (and surprised) to see reference to it in The Clermont Assizes of 1665, Abbé Fléchier’s memoirs. Fléchier was a judge, and his memoir is, among other things, an account of the cases brought before the court.

The case in question had to do with the suit of a certain Madame de Montvallat to separate from her husband. He stood accused, among other things, of exercising “the nuptial right.” I quote:

There is a right, quite commonly exercised in Auvergne, called the nuptial right. … This right originally allowed the lord the right to be present at all marriages among his subjects; to be present at the bedding of the bride…

This usage is no longer current, either because it would be unbecoming for the lords to be present at all the village weddings and to thrust their leg into the beds of all the respectable people who get married, or because the custom was somewhat incompatible with propriety, and exposed gentlemen who had more authority than self-restraint to dangerous temptation when the opportunity was attractive.

So a substitue was found for this disgraceful ceremony in a pecuniary gratuity, the lords having agreed to receive a more substantial earnest of their rights [i.e. money] and the subjects being glad to buy themselves off from the application of a law so perilous to their honour.

So: from this I understand that le droit de seigneur had formerly been a ceremonial custom that occasionally invited abuse, but as of this writing?mid-17th century France?the custom was that the serf simply paid the lord to stay away.

Monsieur de Montvallat, however, was persuaded that old customs were the best when a pretty village girl was to be married, and would not give up his rights; and as they had good reason to fear in his case that he might go beyond the limits of a mere ceremony, they thought it best to capitulate and to give him as substantial a present as they could afford. In any case, he claimed this tribute, which often amounted to half the bride’s dowry.

That the lord had a right in some capacity on the wedding night is clear?that it was a right to take a girl’s virginity is not. Somewhere in this grey area, truth resides.

For more on this subject, see Wikipedia.