Curiously, the phrase “hats for men with long hair” is often Googled, and falsely leads searchers to my site. (My apologies, disappointed one—but then it is April 1.)

I’m rather curious to find out if “wigs for men with no hair” will have a similar result (although I doubt it).

Nonetheless, I do have a serious intent.

In looking through my well-worn copy of Hubert Cole’s First Gentleman of the Bedchamber, I came upon this detail:

Men in 17th century France shaved their heads. The wigs they wore were hot enough! They wore a felt cap under the wigs to absorb the sweat. At night, to protect them from cold (and vermin, likely) they wore wool bonnets. 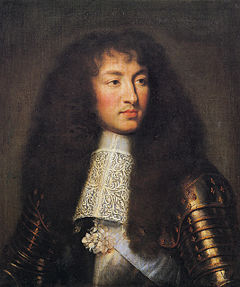 Louis XIV, the Sun King, did not follow this tradition. He was a young king, with abundant, beautiful hair. When he did begin to wear wigs (in the ancient years of thirty-plus), he had the wigs specially made with slits in them, so that his own locks could be threaded through.

“…thus remaining the only hairy-headed man in a nation of the bald.”

Might wig ever make a fashion come-back? Pourquoi pas?