.
I have not been posting, in large part because I’ve been overwhelmed with research.

For now, I’ll just note what I’ve found on Hôtel de Mortemart, the Mortemart mansion in Paris. It has been cited as being on rue des Rosiers. I had mistakenly thought that this was rue des Rosiers in the Marais. However, in 17th century Paris, there were two streets of that name. The one that pertains is rue des Rosiers, quatier Saint-Germain. (This discovery, alas, means I will have to make quite a few changes to my novel?see my blog posts here and here.)

On this 17th century map, you can see its location in the upper right hand corner. 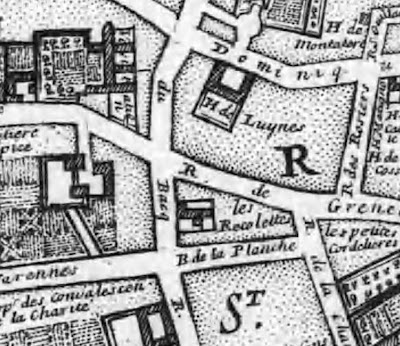 It’s interesting to note that Hôtel de Mortemart isn’t even on rue des Rosiers on this map, but on rue Guillaume, then an extension of Rosiers. (Now Rosiers is called rue de Saint-Guillaume.)

Here is a floor plan of the estate: 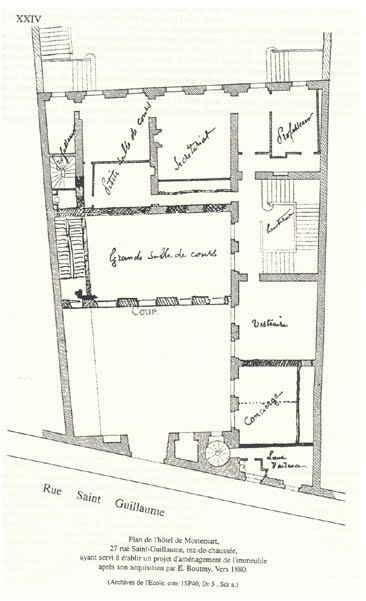 The Hôtel was in the parish of the Saint-Suplice church, where Athénaïs, Mlle de Rochechouart-Mortemart was married, and became, forever more, the infamous Madame de Montespan. Just before the wedding, she realized she didn’t have a cushion to kneel on. She sent a servant running back to the Hôtel de Mortemart for it. He returned in time, but with a dog cushion.

Some sites claim the hôtel was built in 1663, but another map, one dated 1649, seems to indicate its existence.

Links:
History of the Hôtel de Mortemart
17th century map of Paris (under “diplay” select zoom)
For a guide to what might be found on any late-17th century Paris street, go to Blégny’s Le livre commode des adresses de Paris pour 1692.