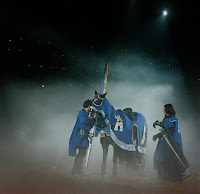 One has to go to strange places to find the relics of the past, these days. I went to Medieval Times yesterday, hoping to see jousting by men in armour. There were no men in armour, but I did see jousting, tilting at the ring and a number of other events that would have been enjoyed at the Court of the Sun King. The horses were spectacular ? although the moves demonstrated were more to my period than to the medieval era (happily for me).

What was most worthwhile, from a research perspective ? because, no doubt, this is a fantasy show ? was the falconry event. I followed the Falcon Master out to the arena with the bird on his hand — holding it much as many a noble man or woman would have done. In the arena the falcon was allowed to fly free, swooping over our heads before “capturing” her prey. These birds were sometimes treasured as much as (if not more than!) children.