I’ve decided to “interview” writers of historical fiction about their research — in particular, writers of 17th century historical fiction. My first is the Canadian writer Mary Novik, whose novel Conceit awed me. In the poetry of its prose, it reminded me of Year of Wonders by Geraldine Brooks, high praise indeed.

Conceit is the story of John Donne‘s delightfully spunky daughter Pegge. I loved the way the novel changed voice — from the point-of-view of Pegge, to that of her mother and father. The details amazed and charmed me. Novik paints a vivid portrait of daily life in the 17th century. In an author’s note, she writes: “… after all is said and done, this is my seventeenth century and I have invented joyfully and freely.” Yes, but she is modest. I’ve been immersed in the 17th century for almost a decade, and, in my opinion, she has “created” it beautifully.

Some vivid and charming examples:

“The pimpernel has closed, but the dandelion is still open, so it is between two and three o’clock.”

“I progressed cautiously into the salon, for I had discovered that my new farthingale went its own way without my legs if I moved quickly.”

“Waiting on the west side of the Fleet, Pegge eyed the naked buttocks hanging down through the privies suspended over the eastern bank.”

My questions to Mary were: “Do you research and then write; do you research as you are writing? What is your pattern? Were there any surprising discoveries?”

My novel Conceit began with a happy accident. Browsing in a bookshop in England, I chanced upon an erotic poem by John Donne that really intrigued me. Had he written it to the teenaged Ann More? I knew he had eloped with her and then complained, “John Donne. Ann Donne. Undone.” I sought out his effigy in St Paul’s Cathedral and stared at the smug grin carved into marble. What had happened between that passionate love affair and his death? I learned that Donne’s effigy was the only one that survived the Great Fire of 1666. That night, I dreamt that his daughter Pegge was rescuing the effigy from the fire storm in Paul’s. That sparked the opening scene of Conceit. Writing it, I looked for witnesses and found that Samuel Pepys, John Evelyn, and others had written dramatic accounts of the fire in their diaries.

Conceit evolved like this, by fits and starts, accidents and dreams. Many of the scenes in Conceit evolved from images or rhythmical phrases that stuck with me. I would write a passage, then run out of steam. To avoid writing, I’d read letters, diaries, or other 17th-century writings, or lie on the floor studying old drawings and maps. A catchy word, a peculiar detail, even a cul-de-sac on a map would send me back to my desk. In one of Donne’s letters, he said “Pegge has the pox.” I hunted for more about Pegge, but all I could find was church records. Strangely, this made her more appealing and she became the main character of the novel.

Researching events, buildings, and well-known people was easier than finding human details, the grit of life. Far too much came to light about Donne’s public side, so I began to imagine his private life. Fortunately, he loved to have his portrait painted. There’s a suggestive one of him as a youth–a sexy, brooding portrait of Jack Donne, the ladies’ man. A more sober painting shows him as the Dean of St Paul’s. His wife long dead, he was by then famous for his sermons. I wanted to get inside that Deanery, to find out what his seven children thought of him, but no biography could put me there. Locating his Will was a breakthrough, because as well as bequests, it listed the contents of the Deanery’s rooms. It also mentioned an old servant, Elizabeth, who had looked after his daughters. This was delicious, since I had already invented such a person and named her Bess.

Most of my research was like this, discovering surprising facts, consulting eye-witnesses, and pure serendipity. I suppose this is why it took me seven years to get fully inside the characters, hearing, seeing, and even speaking as they did. Immersed in 17th-century English, I savoured oddball words that have been lost to us today. A happy discovery was that Donne invented the modern meaning of the word “sex.” This led me to write a scene in which he gives the word “sex” to Ann on their wedding night, as well as a later one in which his children joke about the innuendos in his love poems. 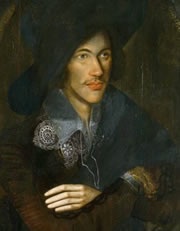 There was one biography of Donne that I did like–the one written by Izaak Walton, the fisherman. This oddity was a treasure-trove. Full of delightful errors and myths, it revealed that Walton had not really known his subject. My Pegge would have been irate at this glorification of her father, who had a generous helping of warts. I tried to usher Walton firmly out the door, but he kept showing up in my novel. He hung about the Deanery, picking up crumbs of gossip to use in his biography. He pandered to the dying Donne, a prelude to writing his famous description of Donne’s apotheosis in The Life and Death of Dr Donne.

I drew on my own experiences as well–walks along river pathways and childhood memories of a noisy household with five siblings. Michael Ondaatje said that facts breed and what they produce is fiction. I love that. I suppose if I had to sum up now, I’d say I was seeking verisimilitude, not historical accuracy. I like to think that if someone read a biography of Donne alongside my novel that they wouldn’t contradict one another, they would simply reveal different sides of him. But most of all I hope the reader has as much fun reading Conceit as I had writing it.

(More information about Conceit and the 17th century may be found at http://www.marynovik.com.)