I’ve fallen into the rabbit hole of research today. I began this research thinking that it wasn’t possible for the Queen to have had a child by a beloved African dwarf, but now I’m not so sure. I’ve put together the evidence (such as it is) … and my own conclusions (for now): here. 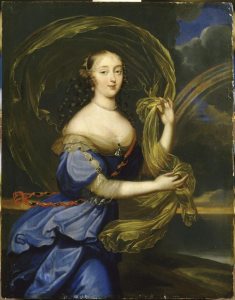 What’s interesting about the Madame de Montespan chapters (I’ll take up the question of their authenticity later) is the repeated statement that looking at someone while pregnant could affect the looks of the child. For example, in speaking of a young man who looks very much like the King:

The resemblance, I must confess, is the most striking that I have yet
seen; for it is complete, even to the tone of the voice. But a look
might have operated this miracle. Instance the little negress, the
daughter of the poor Queen, that Queen so timid and entirely natural, who, to her happiness, as much as to her glory, has never looked at, approached, or distinguished any one except the King. (Chapter XXXIII, page 474)