Saint Fiacre: the patron saint of taxi drivers and gardeners 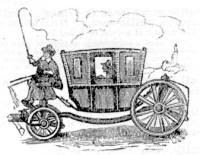 Karen Newman’s recent post, “Coach: Status Symbol” on the wonderful Wonders & Marvels site reminded me of something I’d read in A JOURNEY TO PARIS IN THE YEAR 1698 by Martin Lister.
Here is the passage (with changes made for readability):

To begin with the coaches, which are very numerous here, and very fine in gilding: there are but few, and those only of the great nobility, which are large, and have two seats or funds. But what they want in the size, beauty, and neatness of ours in London, they have infinitely in the easiness of carriage, and ready turning in the narrowest streets.


For this purpose, they are all crane-necked, and the front wheels are very low—not more than two feet and a half in diameter—which makes them easy to get into, and brings the coach-box down low, so that you have a much better view out the foremost glass (our high-seated coachmen being ever in the point of view).


Also, most coaches —even fiacres or hackneys—are hung with double springs at the four corners, which breaks all jolts. After having used the Paris coaches for four months, I rode in the chariot of my Lord, which came from England. Every jolt could be felt, so one was more tired in one hour in that coach, than in six in the others.

Interesting! (There is so much in this book, I’m tempted to transcribe—and translate into modern English—the entire thing.)
Note: A fiacre is a small hackney coach (see illustration above). In 1640, Nicholas Sauvage, who hired out hackney coaches, lived at the Hotel St. Fiacre in the Rue St Martin, in Paris. (Now 223 rue St Martin in the Marais, according to this post.)
As well as being the patron saint of gardeners, Saint Fiacre is now the saint of taxi drivers.

In the 17th century, there was a revival of his fame, and pilgrims came to the chapel where he was buried, traveling by hired coaches known as fiacres. The first taxi stand in Paris was said to be near the Hotel St. Fiacre, and today Paris taxis are still known as fiacres.