Warning: this is a review of a review … of a book I’ve not yet read.

Nevertheless, it brings up something I’d like to address, which is the on-going war between the English and French. 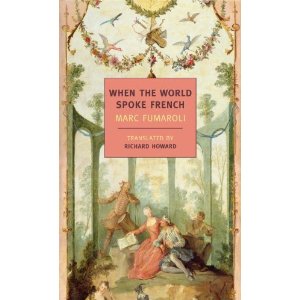 The review — written by Jonathan Keates and published in the U.K. Telegraph — is of When the World Spoke French, by Marc Fumaroli, a member of the Academie Française.

The reviewer is, I think it fair to say, scathing, yet accusing Fumaroli of being “distinctly provocative.”

Gary McCollim, a historian I often quote on this blog, notes: “His review misses the point about Fumaroli’s book…that there was a time when French was the language of civilized society. Instead, he chooses to attack the French.”

For example, to quote from the review:

“Cultural orthodoxy in France … teaches her citizens that their country invented most of what the world values under the name of civilisation. The Enlightenment, they are encouraged to accept, began in Paris under the ancien régime, while the Revolution of 1789, its ideological offspring, introduced the rest of Europe to the concept of political liberty.”

Where did the Enlightenment begin?

Gary responds: “… whole volumes have been written about where and when the Enlightenment began. Newton and Locke had a role as did the scientific revolution and the growth of skepticism as revealed by writers like Pierre Bayle. Political economics came into existence as well with writers in England and France (Vauban, Boisguilbert, Saint-Pierre, Hay du Chastelet) playing important roles. The subject is too broad for anyone serious to think that their little island is where it all began.”

Another quote from the review:

“For those of us who, whatever our regard for French civilisation, acknowledge its imperfections – why, for instance, could it produce no decent poetry between 1650 and 1800? – this book often appears complacent, displaying a calculated blindness to the wider realities of the period it purports to explore. Some of Fumaroli’s claims are inaccurate – Louis XIV did not win the War of the Spanish Succession – while others, such as modern democracy “had its birth under the ancien régime in France”, are frankly ludicrous.”

Did the French not produce any decent poetry between 1650 and 1800?

Gary: “I guess Moliere, Racine, and a host of others don’t count for Mr. Keates.” (My thoughts exactly.)

Did Louis XIV win the War of Spanish Succession?

McCollim answers: “The War of the Spanish Succession was fought to prevent a French claimant from becoming King of Spain. How did that work out? While it is true that France lost a lot of battles, Spain gave up territories in Italy and the Low Countries, Britain seized Gibraltar, and France surrendered some territory in North America, all of which proves that the opponents of France were not interested in who sat on the Spanish throne; they all wanted to grab land wherever they could find it.”

Was modern democracy born under the ancien régime in France?

“Britain is not the creator of modern democracy. The writer [Keates] confuses modern democracy with modern representative government, an entirely different thing. Universal manhood suffrage did not arrive in Britain until the 1880s when property/tax paying requirements were finally eliminated to give propertyless workers the right to vote. Women did not get the vote until 1918 or so. France had universal manhood suffrage in 1848 but women did not get the vote until 1945. Meanwhile, universal manhood suffrage arrived in the United States in 1866 and, although women could not vote in every state in the nation until 1920, some states granted women the right to vote before then starting with Wyoming where women could vote in 1869.”

Historians: line up at the mike!