I’ve been absent, both on holiday and down with a nasty cold. (Don’t feel too sorry for me: I’m in Buenos Aires, after all.) I’m just going to post some blog links.

First, I’m honored that Mistress of the Sun was included in Margaret Donsbach’s top historical fiction of 2009 list: click here. Margaret is both a demanding reader and perceptive reviewer.

I’ve been enjoying reading Margaret Atwood’s blog. Her “Fifteen Book Tour Packing Tips” has excellent advice—not surprising considering that she spends most of her life traveling. (How does she do it?) I’ll be reviewing her post on “Ten Editing Tips, for Your Fiction Mss.” on my return to Normal Life. Early in January, I plan to read/edit the first draft of the novel I finished at the end of October. (Am I nervous? You bet.)

My New Year’s resolution for 2010: finish drafts two and three (without going crazy).

Happy New Year, everyone. Twenty-ten has a nice round sound and bodes well.

On Wednesday, in a large auditorium in Kingston, Ontario, I saw Margaret Atwood‘s The Year of the Flood performance. Wow! Each city on this (twenty? thirty?) multi-city international tour puts together it’s own dramatization of the script. I can’t imagine any city doing a more beautiful job than Kingston. (The article in the U.K. Guardian was less than enthusiastic about the London event, alas.)

In Kingston, there was a choir of about twenty, three musicians, three actors: all in wonderful costumes. The choral arrangement of the hymns in the book was spectacular.

Ms. Atwood has hit the ball out of the park, yet again. She’s 70, performing at a different city every night. Kingston was half-way through the tour. She visited organic gardens on arrival in Kingston. After the hour-long performance, she signed books for about an hour, then went to both the cast party and the Kingston WritersFest reception. (I’m told: I was far too tired to stay up that late.) Then, a TV interview the next morning, and off she went on a train for the next pit-stop. I’d like to know how she does it!

I’ve been enjoying Atwood’s blog while on tour: here. 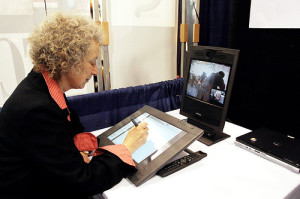 Let’s face it: Margaret Atwood was mocked for creating the LongPen. It didn’t help that the first Big Event failed. But now it works and I hear it talked about in the US—someone had seen it in an Ann Arbor bookstore, seen A Wolf at the Table being signed by Augustan Burroughs, who was in New York. “A miracle!” They didn’t even know that our Margaret Atwood had created it. “And we scoffed,” I confessed, but proudly.