The Hope Diamond meets the King of Bling

According to legend, the famous Hope diamond was cursed when it was stolen from the forehead (eye) of a Hindu statue of the goddess Sita. Thereafter, bad luck and death was believed to fall to its owner, as well as to anyone who touched it. 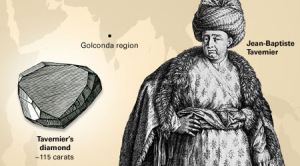 The truth: in the mid-17th century, Jean Baptiste Tavernier, a French jeweler, went to India in search of diamonds. Here, is his description of meeting the Emperor there:

“In the middle of this hall, and near the side overlooking the court, as in a theatre, they place the throne when the Emperor comes to give audience and administer justice. It is a small bed of the size of our camp beds, with its four columns, the canopy, the back, a bolster, and counterpane, all of which are covered with diamonds.”

Clearly, he had come to the right place. Tavernier traveled on to the Golconda region, the center of India’s diamond mining. There, sixty thousand slaves dug for diamonds, dressed only in loincloths, so that they could not steal. (Although it seems to me that one could manage to hide a diamond or two rather nicely in a loincloth.) 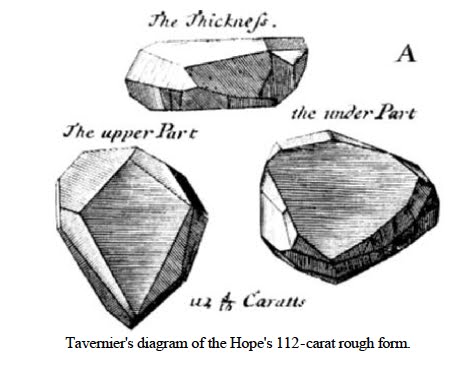 It was likely here that Tavernier bought a crudely-cut 112 3/16 carat diamond. The jewel was so blue that at first Tavernier thought it was a large sapphire, describing its color as a beautiful violet. He traded ornate goldwork for diamonds, including the big one, and slowly made his way back to France, arriving twenty-six years later, in 1668. There, he found the perfect client: Louis XIV, the Sun King.

Some have called Louis the King of Bling. That’s rather unfair, in truth. Louis XIV had a refined eye for and passionate love of beauty. One can only imagine his feeling of awe seeing 1,200 diamonds spilled before him. (One can also imagine the resistance of his sensible Finance Minister Colbert to the price: I’ve seen one estimate unverified, I should note that it equaled seventy-five million dollars today.)

At that time, European royals favored pearls. The Sun King set a new trend for diamonds. He had the smaller stones set in buttons and shoe buckles, and gave away diamonds as gifts: the Court rained in diamonds for a time! French jewellers had refined a stone-cutting technique, and the King had the biggest diamond the Tavernier it was called at the time, re-cut to enhance its brilliance. It was reduced to a “mere” 67 1/8 carats . . . but oh, the light it gave off! Described as an intense steely-blue, it was renamed le bleu de France, the French Blue or the Blue Diamond of the Crown. Set in gold, Louis would wear it on a long ribbon around his neck on ceremonial occasions. 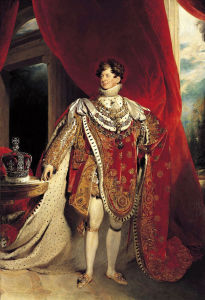 And thus began the French Blue‘s long journey: to England (where it was owned for a time by King George IV), to the United States (where it acquired the name the Hope Diamond after one of its owners, Henry Philip Hope), to London again, then to New York city, France, Washington, D.C., eventually ending up at its present home at the Smithsonian Institution in Washington. 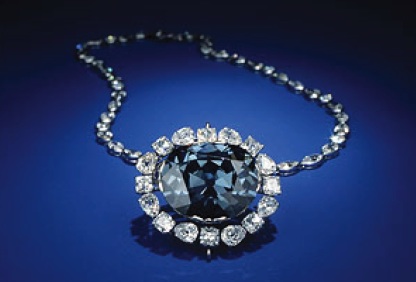 Soon the Smithsonian plans to remove the Hope Diamond from its current setting (shown) and display it for a period of time on its own. Then it will be reset. In accord with the democratic nature of our times, the Smithsonian suggested three possible settings and offered the public the opportunity to vote for one or another on the Net. (The Smithsonian may have changed their mind on doing this: the vote site is not functioning at the time of this posting.)

As for the so-called “curse”, it is true that everyone who ever owned the Hope diamond died . . . in good time. I don’t think the Smithsonian employees need to worry.

– From Novelist Catherine Delor‘s excellent blog, Versailles and More: her post on the Smithsonian’s plans to reset the Hope Diamond, and another on the diamond’s history.

– “Dressing a Rock Star; a New Look for the Hope Diamond,” NPR’s coverage on the Smithsonian’s plans.