The King goes … swiming? … with his mother (revisited) 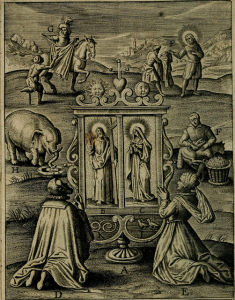 (Note: to followers of my blog on writing: you will have seen this before. I mistakenly posted it there. Confusion reigns!)

A few posts back I wrote about an entry in a 17th century diary that I translated in the following way:

It was hot in the evening. The Queen (i.e. Queen-mother) bathed, and the King, who very much wanted to bathe with her, commanded me to go find M. Vautier, the Head Doctor, and beg him to instantly approve for him to go in the bath with the Queen.

I noted that the doctor was persuaded to approve the King’s wish to bathe with his mother. This was August 7 of 1648, and the King would turn 10 the month following. It seemed strange to me that a doctor’s permission would be required.

I asked for corrections of my translation, and Gary McCollim, a wonderful historian who frequents a Yahoo Louis XIV forum, responded:

According to my copy of Le Petit Robert, the verb se baigner can mean to plunge oneself into the water (sea, river, etc.) in order to swim (nager), for pleasure rather than just for cleanliness.

According to Levantal’s Chronographie, Louis XIV was residing at the Palais Royal in August 1648. The “Gazette de France” reported that he and his brother went to a church located on what is today’s Quai Voltaire in Paris to worship on 7 August 1648. Thus, if they were resident at the Palais Royal, the interesting question would be where did the Queen go bathing or swimming?

Note: … Louis XIV did have smallpox in 1647. Bathing or swimming were regarded as somewhat dangerous to one’s health. No wonder, considering the general cleanliness of water. Seeking his physician’s advice would seem to be a normal thing to do.

One mystery solved, and another one opened: where, indeed, would the Queen and her son gone for their summer-day plunge?