We all know the song “The Twelve Days of Christmas”: I thought, for this post, I would have a look into its history. As with any research, one thing leads to another … 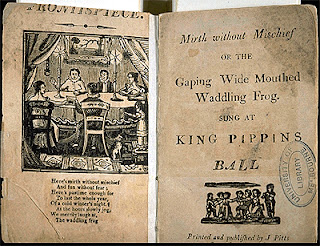 The words to the song were first printed in a children’s book, Mirth Without Mischief, in 1780.

(The title is quite delightful as is, but even more so with the addition “…or the Gaping Wide Mouthed Waddling Frog.” You can buy a reproduction copy of Mirth Without Mischief through Amazon: click here.)

In Mirth Without Mischief, “The Twelve Days of Christmas” is presented as a memory game. Players gather in a circle, and each one in turn says the first line. Then, when it comes around to the first player again, he gives the second line, and so on, until someone messes up and punishment ensues.

Of course the song itself dates further back, some even claiming its origin in the 16th century. It is generally thought that the original verse was French. Others claim it was a Catholic catechism memory song, taught to the children of oppressed English Catholics during the Reformation. (This theory is considered to be an urban legend by some.)

As with any historical exploration across cultures, dates will differ. For some, Saint Steven’s Day (Boxing Day) marks the beginning of the twelve days of Christmas, with welcome candles put in windows. A Yule Log (an ancient custom handed down from the Druids) was kept burning until the New Year to ensure good luck from year to year.

Twelfth Night marks the traditional end of the Christmas season: but does it fall on January 5th or 6th? That, too, depends. We live in very Catholic Mexico in the winter, and January 6th is the big event here. The night before, while children sleep, fathers swarm into the markets to buy their children a gift to discover in the morning. Even the big department stores stay open, and taxis and buses are busy taking parents from shop to shop in the dark of night. 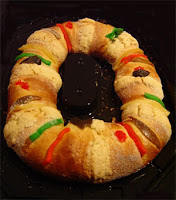 The Twelfth Night party is celebrated with a King Cake (Rosca de Reyes here, Gateau de Rois in French-speaking countries) in honour of the three Wise Men. It’s a yeast cake filled with dried fruits and nuts. It is based on an ancient Arab recipe, and has been made in this way by Christians throughout most of Europe since the Middle Ages.

In Mexico, as in times past, the person who gets the piece with a plastic baby Jesus in it (a pea or bean in former times, of course) is crowned. Here the tradition is that that person is then obliged to give the Twelfth Night party the following year.

I love this etching of Christmas festivity gone wild: 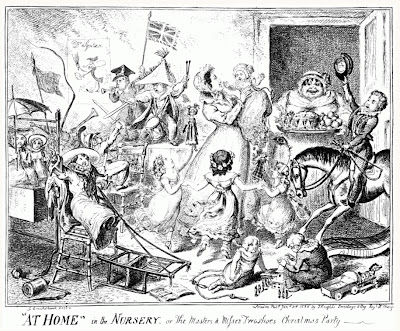 Rest assured that however you celebrate the holidays, whatever you do has a long and very merry tradition.