Was Descartes murdered by a priest? 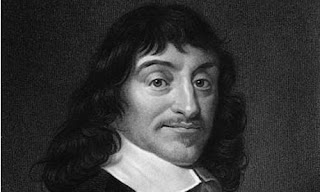 Yes, according to academic Theodor Ebert ? poisoned by an arsenic-laced communion wafer given to him by a Catholic priest.

The more common theory was that Descartes died from the winter cold and early morning hours imposed upon him by Queen Christina of Sweden, his student.

However, Descartes’s doctor described having found “something wrong” in Descartes urine ? blood, Edbert concludes: “That is not a symptom of pneumonia; it is a symptom of poisoning, chiefly of arsenic.” Also, Descartes asked his doctor to prescribe an emetic to make him throw up, which Ebert believes shows that Descartes may have believed he had been poisoned.

Ebert researched this for a long time, and I have to assume he did his homework. I’m unable to find the title of his new book, but I hope it helps to answer some of the questions that come to mind: How much arsnic can one get on a communion wafer? for example, and couldn’t it be tasted?

For more on this, see this article in the U.K. Guardian:
http://bit.ly/Descartes

Also, this blog post adds to the discussion:
http://bit.ly/Descartes_murder