When youngsters marry: the not-so-romantic wedding night of Anne of Austria and Louis XIII 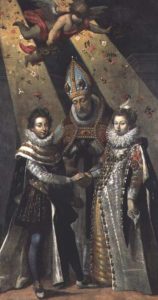 I’ve been researching adolescent marriages—right now, the marriage of Anne of Austria to the French king, Louis XIII, in particular. She was a Spanish princess (confusing, I know). They were both 10 when engaged, and 14 when married.

Often, in such cases, the young bride and groom do not live together and consummation is postponed until they have matured. In this case, however, the issue was forced in order to prevent the possibility of an annulment.

Although the son of the manly Henri IV (or, perhaps, because of it), Louis XIII was a timid boy, especially with respect to the opposite sex. It’s likely that he was homosexual by inclination. It’s said that he had to be bodily carried to the wedding bed.

The bed was canopied, but in the room sat two nurses. In the morning, the boy’s mother, the Queen-Regent, examined the sheets for evidence of virginal blood. The two nurses testified that the act had been performed twice. One wonders about this, for once free of his young wife’s bed, the fourteen-year-old king refused to return, refused even to eat with her for over six months.

His reticence was a serious diplomatic concern. A cousin suggested a solution. She was going to be married: she and her betrothed suggested the King watch their nuptial congress. He did so, applauding as they performed for him twice—or so the story goes. Yet even so he would have nothing to do with his wife.

Louis XIII did, eventually, manage to do “his duty.” Anne suffered a series of miscarriages, unfortunately. The first child she carried to term was Louis XIV, the Sun King, aptly called “God-given.” Needless to say, because Anne did not give birth until after she and Louis XIII had been married for over twenty years, there have always been rumours—ungrounded, I should note—about the Sun King’s true biological father.

Do you know of other stories of youngsters marrying?