Life, Love & Laughter in the Reign of Louis XIV: not a lot of fun 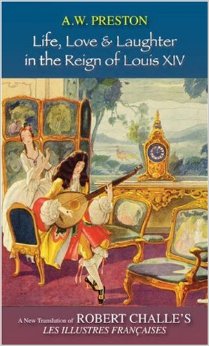 I was excited to get Life, Love & Laughter in the Reign of Louis XIV by Robert Challe (translated by A. W. Preston)—a novel written during and about the Court of the Sun King—but after 163 pages, I’m calling it quits.

There is something so often adolescent about the culture of the mid-17th century, an obsessive interest in “Does he love me?” “Does she not?” (and “How rich is her dowry?”) that I find wearing.

The novel is multi-layered, in the form of (long, tedious) stories revealed during a social gathering.

It opens in a traffic jam, 17th century style.

[blackquote] …a horseman…found himself caught up in one of those traffic congestions which at the time occurred daily at the end of the rue de Gesvres. …the carriages … were streaming in from all sides. [His] valet riding behind him was having the same trouble, and both were in danger of being crushed between the wheels of the carriages …

Getting from A to B is difficult for any novelist, but Challe gets his hero out of this fix by having people in various carriage offering him a seat. He stood, unsure which offer to choose, when someone called out more loudly than the others. Our hero dismounted and got in the carriage, managing, as well, to get his footman to climb in after him …

…preferring to risk his horses rather than leave the young fellow in danger.

This mark of a hero impressed onlookers, who call out to their drivers to avoid running down the two horses. (Not because they care about the horses, mind.) The valet then gets back on his horse and follows after his master and the rescuer, leading his master’s horse.

I did like some of the details of daily life in the novel, such as in the scene above. I knew carriages often came head-to-head on narrow streets, but I’d never considered that there could actually be a daily traffic congestion much like rush hour.

Other details I enjoyed:

an in-house tailor instantly making a suit of clothes.

a mailman who delivers door-to-door. (I’d be interested to know when, exactly, this began. I imagine his task was not an easy one, since there were no street addresses.)

a door weighted to close itself.

sending for a sedan chair.

I’m sure I would glean a handful more such details were I to persevere for another 424 pages, but no, I will resist.

This novel is described as a masterpiece: I beg to differ.

Tags: 17th century, daily life in the past